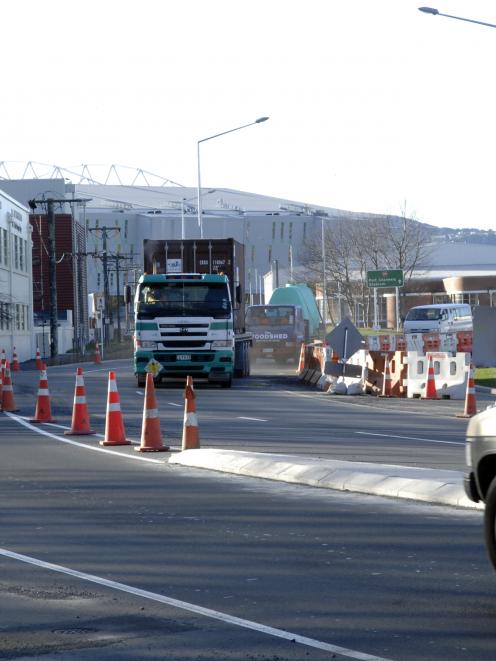 Motorists travel through the southern end of the recently completed State Highway 88 link at the intersection of Anzac Ave, which was opened to traffic for the first time yesterday morning. Photo by Linda Robertson.
Commuters making the trip between Port Chalmers and Dunedin yesterday along the recently completed State Highway 88 link had a new view of the Forsyth Barr Stadium.

The 1.2km-long section of realigned highway behind the stadium, which includes a 60m-long new bridge across the Water of Leith, was opened to traffic yesterday.

The Dunedin City Council-managed transport project, which cost about $24.7 million inclusive of costs associated with property and buildings in the area behind the stadium, was carried out by contractors Hawkins Infrastructure and Opus International Consultants.

The New Zealand Transport Agency, which is the controlling authority responsible for the country's state highway network, contributed 65% of funding to the collaborative project.

DCC project engineer Evan Matheson said the alignment would take the majority of port-bound traffic away from the section of Anzac Ave in front of the stadium and the adjacent University of Otago Plaza development.

It was "a significant safety improvement" given it reduced traffic flows through a busy pedestrian area, with foot traffic projected to increase in time as the stadium and university developments were completed, Mr Matheson.

The NZTA now takes over control of the completed highway in a straight swap for the diverted part of Anzac Ave. Construction costs for the highway realignment are about $13.1 million.

The realigned section of SH88 is also a key cycleway link in the Dunedin-Ravensbourne shared path and connects the existing central city and harbourside routes.