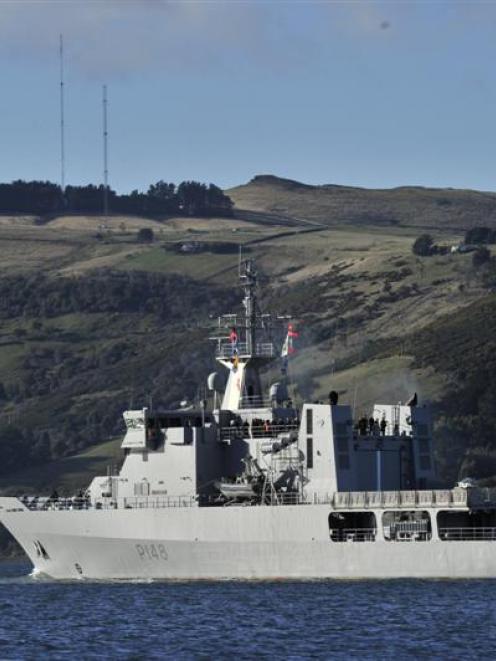 HMNZS Otago in Otago Harbour earlier this year. Photo ODT Files.
Fault-prone offshore patrol vessel HMNZS Otago has been hit by an electrical problem in one if its engines, forcing it to return to Auckland for repairs, three days into a seven-day operation in the subantarctic islands.

Commanding Officer, Lieutenant Simon Rooke said the fault was traced to wiring in the engine controller.

Otago was with sister vessel HMNZS Wellington about277km from their destination of Campbell Island.

Heavy seas initially made it difficult to find the fault, so the starboard engine was closed down, and the ship continued towards the island on one engine.

However, the fault was located before arrival and a temporary repair made, enabling Otago to enter Perseverance Harbour on two engines.

The decision was then made to return the ship immediately to Auckland to have the engine repaired permanently, under warranty.

Lt Rooke said he was pleased with the way the ship had handled the high seas on its first journey to the southern ocean.

The fault was unfortunate, but the ship was technologically complex and crew were still learning to operate it.

He expected to make the four-day return passage to Auckland on two engines.

The problem was similar to one Wellington experienced on its maiden voyage from Melbourne, where the ships were built, to Auckland.

Both ships were taking part in an operation, delivering a expedition of 15 researchers and Department of Conservation staff and supplies, and picking up researchers leaving the island.

Wellington will now accommodate Governor-General Sir Anand Satyanand and his wife, Susan, Lady Satyanand, who had been travelling on the Otago.

They and will visit the Auckland Islands before returning to Dunedin on Sunday.

People had forgotten that the same sorts of little problems plagued the Anzac frigates when they were first put into operation, he said.

"This experience is no different. When you bring in these new technologies, these things can happen.

"I'd expect theses sorts of incidences to drop off over time."

Disparaging comments about the ships' capability were "unfortunate", he said.

"This ship is capable; there is nothing fundamentally wrong with it."