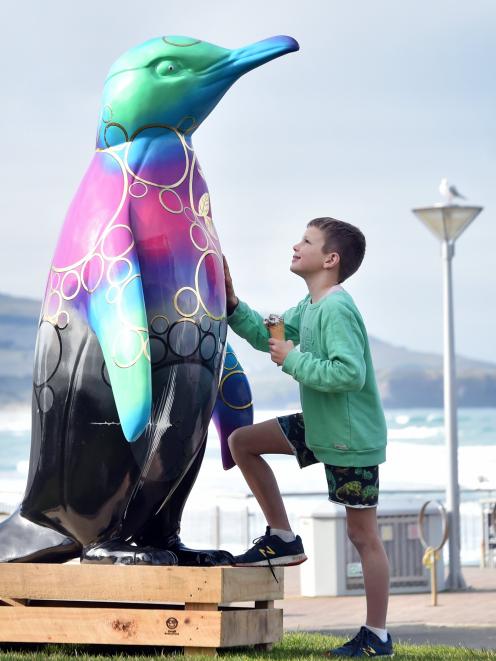 Checking out a 2m-tall penguin sculpture that made an appearance at the St Clair esplanade on Saturday is local resident Charlie Willis (8). PHOTO: PETER MCINTOSH
It is not every day that you see a colourful 2m-tall penguin at St Clair Beach.

But long-time local resident Stuart Kemp hopes that eventually, it will be.

He has been working to gain support for a sculpture, which he bought at a charity auction in Christchurch, to be given a permanent home on the Esplanade.

The penguin, named Bubbles, was certainly turning heads when Mr Kemp took it to the beachfront on Saturday.

Charlie Willis, who has lived in St Clair his whole life, said he thought Bubbles should stay for good because he was "nice and colourful".

"I think people in our area with family and children would really benefit from having the penguin here.

"It is a nice drawcard for our area ... It feels like it has a sense of belonging here on some level."

Mr Kemp, who has lived in St Clair for 60 years, said he came up with the idea as not much had changed in the area for many years.

"St Clair needs to be brightened up a little bit.

"It is colourful and it makes you smile."

It also made sense given the connection between Dunedin’s coastline and penguins, he said.

So far, feedback from those passing, as well as people on social media, had been overwhelmingly positive.

He'll be forced to take it away.
"Public art works" can be ugly, mediocre in concept and execution, unpopular and terribly expensive for the quality but that doesn't matter, Dunedin can't have random acts of enhancement. We have special people with diplomas on the DCC payroll to decree what can be put in public spaces at our expense.