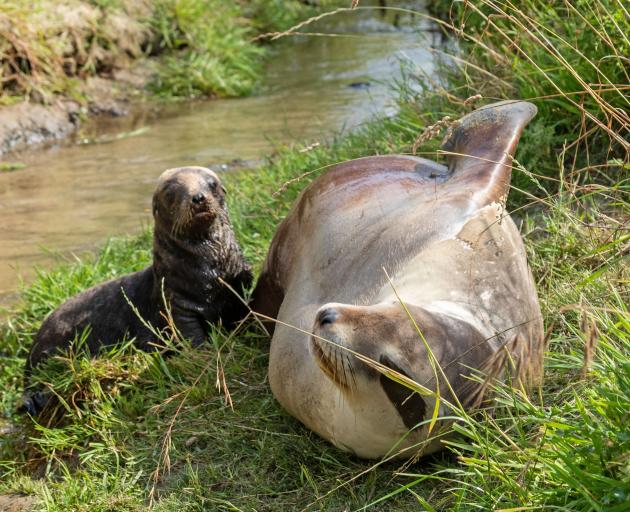 Basking at an undisclosed Dunedin location is 5-year-old Mika and her very first pup, about 2 weeks old. Mika is the great-great-granddaughter of Mum, the matriarch of the Dunedin sea lion population immortalised in a statue at the St Clair sea wall. PHOTO: JOHN BURKE
Successive years of successful breeding seasons could one day put Dunedin on the map as just the second mainland breeding colony of the threatened New Zealand sea lion in the past 150 years.

Department of Conservation biodiversity ranger Jim Fyfe said with about 20 pups expected this year from Otago Peninsula sea lions, it would likely be at least another 10 years before pup counts reached the threshold for a breeding colony of 35 pups a year.

Further, there would need to be at least 35 pups born every year over the next five years before Dunedin reached official breeding colony status.

This year’s counts might not be complete until autumn.

When found, the pups would be counted but Doc did not go looking for them too intensely.

If pups were well hidden along Otago coasts, that was a good thing.

The South Island population included a second lineage, started in 2006 in the Catlins by a female colonising the mainland from the Auckland Islands

The Catlins population still numbered fewer than 10 breeding sea lions due to the loss of several breeding females — including Matariki, who was killed along with her female pup on a road in Kaka Point two years ago.

Three other females, two believed to have come from the Stewart Island population, had also started having pups elsewhere on the mainland in the past six years.

In total there were possibly 30 to 35 breeding-aged female sea lions (4 years old or older) on the mainland, he said.

Nevertheless, for the past two years there had been only 22 or 23 pups.

"This season, so far, we are aware of 14 pups born around Otago Peninsula and three that have been born in the Catlins. We expect that the final count will be in the mid to late 20s.

"If the threshold is applied across the mainland, we could be reaching 35 pups much sooner, especially if we get more spill-over from the Stewart Island population."

New Zealand Sea Lion Trust chairwoman Jordana Whyte said if 20 pups were born to Otago Peninsula sea lions this year, people working with the animals in Dunedin would be thrilled.

The number of sea lion pups born in Dunedin had been limited to the mid teens for the past few years, and this year she expected the final count to be in the high teens.

People’s interactions with, and behaviour around, the wild animals was improving, she said.

Yesterday was the first day of tagging and Doc staff and trust volunteers expected to tag two pups.

In April 2018, Doc said the annual pup count in Stewart Island had numbered 55 and, because the numbers had been consistent for several years, it was declared a breeding colony, the first in more than 150 years.