How $5.1m worth of 'exclusions' became included 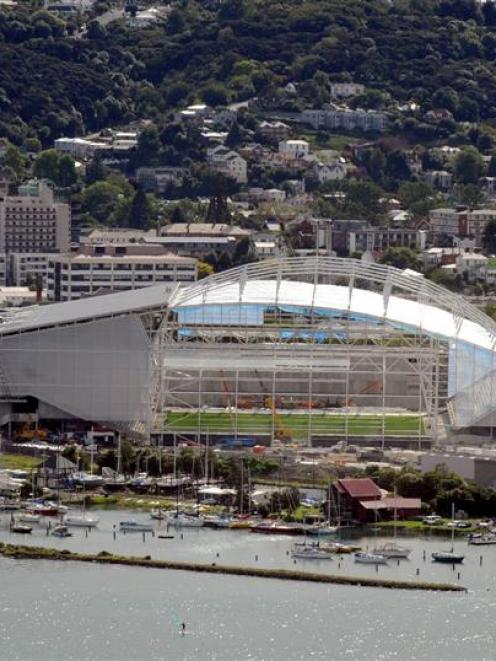 The green of the new pitch shows through the Forsyth Barr Stadium yesterday. Photo by Stephen Jaquiery.
Construction at Dunedin's Forsyth Barr Stadium may be rapidly reaching a conclusion, but in the shadow of the structure, the financial debate and the entrenched political tensions, continue. Dunedin City Council reporter David Loughrey explores why an extra $5.1 million funding was granted for the stadium this week, and finds some differing views.


A report that went to the Dunedin City Council's finance, strategy and development committee on Monday had a title that made something of a statement.

The report was called "Forsyth Barr Stadium Base Building Further Requirements", but whether the requirements were further to the base build is a matter of some contention.

And the arguments over the issue left the council facing a main course of internal tension and a side order of chest beating as the week went on.

Angry texts were sent, Mayor Dave Cull was accused of "talking out of school", and the word "integrity" was used in public.

The stadium debate is back, and the council appears to be "up to" $5.1 million worse off.

The issue at stake in the latest eruption is an argument that goes back to 2008, and, remarkably, appears a long way from being resolved.

It relates to a list of items said to be "excluded" from the guaranteed maximum price (GMP) budget for the stadium.

In April, 2008, the council received four peer reviews of the Carisbrook Stadium Trust's investigations into the stadium, ordered so councillors could get an independent assessment of the trust's work.

Davis Langdon was asked to review progress made by the trust, and it was the reviewer's report that first coined the term "exclusions" to describe what was considered to have been missed from the project's planning.

Asked in 2008 to respond to the report, CST chairman Malcolm Farry said the kitchen fit-out would be the responsibility of whoever took a contract to run the facility, a situation he said was "very commercially common".

Broadcasters would provide their own technical requirements, and turnstiles and replay screens could be hired, as they were only needed for big events.

But on Monday, at a non-public meeting of the council, "up to" $5.1 million was granted to Dunedin Venues Management Ltd for some of those items.

Surely, that money was for exclusions?

Mr Cull thought so. He said this week in his opinion the items funded were not "extras" for the stadium, but aspects that should have been in the project from day one.

"They were always an integral part of making the stadium fit for purpose."

The guaranteed maximum price was "waved at the community and the council", but the items funded were dropped from the budget to keep it at the level promised, he said.

Not so, Mr Farry said.

Yesterday, he responded to each item in turn.

He said a consultant had been brought in to consider the catering fit-out, and the result had been peer reviewed and bench-marked against stadiums around New Zealand.

"Everything indicated what was designed was more than appropriate for what we were doing."

The CST had originally expected a $2 million contribution from the caterer who took the tender, a figure borne out in the report to Monday's meeting.

The company was also now setting up a kitchen that would be a base kitchen for all the venues it was managing, including the Dunedin Centre, Dunedin Town Hall and the Edgar Centre.

The contractor DVML was talking to had been willing to put in $3 million - a matter again backed up by Monday's report - but a further $2.4 million was still needed.

Mr Farry suggested the budget for the kitchen should have come out of the Dunedin Centre and town hall upgrade budget, but that was not a matter for him.

On the big screen, Mr Farry said when the CST did its research four years ago, few, if any stadiums in the world owned their own screens.

They were only used a few times every year, and the CST considered with sponsorship and advertising, the screen could be a "neutral" cost.

"DVML have explored it and decided they could make money if they owned it themselves.

"I would not wish to dispute that."

On the signage, the report said way-finding signs were assumed to be part of the naming rights package.

"This strategy was not successful," it said.

Mr Farry said the signs were seen as "a significant advertising and sponsorship opportunity".

He accepted times were different than they were four years ago, but he still felt they should have been covered that way, as they were "clearly the responsibility of the naming rights sponsor".

He said the telephone exchange noted but not funded by Monday's meeting was not an issue for the builder of the stadium, and a wifi system, also noted, was a technology that had not advanced to the stage it has now when the stadium was designed.

Mr Farry said the CST had benchmarked the stadium against others in New Zealand and Australia, and "undertook to be at least equivalent, and superior in many respects".

"We've had to do that on a prescribed budget.

"We've achieved all of that and the CST has not gone back to the council for additional funds."

But Mr Cull said he believed money was "taken out" of the kitchen fit-out to save the GMP.

"Setting up a kitchen is complicated, till you have a [company] that knows what they want, and what we want of them.

"I acknowledge it's difficult to say `this is how much we need for the kitchen'.

"Nonetheless, there is less there to properly fit out the kitchen than there should have been."

During the week, several councillors have noted the "up to" aspect of the resolution to provide "up to" $5.1 million.

And Mr Cull said he did not know how much of the funding would be used.

"I am confident money from non-ratepayer sources will be found to offset some of it."

Responding to criticism of his vote for the funding, he said the Rugby World Cup was almost upon the city.

"DVML may not earn money from that, but to have games in the city will provide considerable economic input.

And if the stadium was not finished, "the costs would still carry on".

On criticisms he was holding meetings on the stadium with the public excluded, he said he had been behind the decision to make the list of "extras" public.

"I had been asking for some time [to get the list and the costs] but I did not get it.

DVML chief executive David Davies did not have time for an in-depth discussion on the issue this week.

Of all the stadium protagonists, he is one better placed to provide the details behind the extra items.

By email, he said each item had "a unique set of issues to be worked through with suppliers".

"We are currently in these discussions and, at this stage, the details remain commercially sensitive."

Mr Davies promised to discuss the issues with the Otago Daily Times next week.

That may end the debate.

How they voted
There were several votes at the non-public meeting.For the substantive vote, that the committee recommend the council approve additional borrowing of up to $5.15 million to fund capital expenditure for the stadium, Crs Bill Acklin, John Bezett, Syd Brown, Neil Collins, Paul Hudson, Chris Staynes, Richard Thompson and Mayor Dave Cull voted for, while Crs Fliss Butcher, Jinty MacTavish, Teresa Stevenson, Lee Vandervis and Kate Wilson voted against. Cr Andrew Noone had left the meeting, and Cr Colin Weatherall apologised for non-attendance.