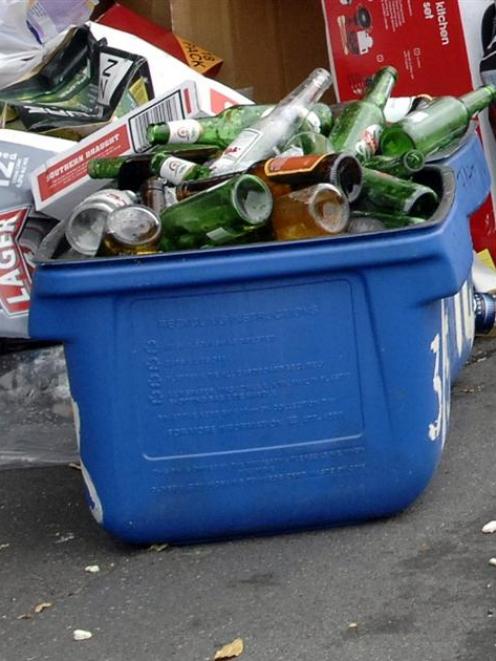 Some blue bins have cracked. Photo by Linda Robertson.
Safety concerns mean hundreds of ratepayers will have to buy new recycling bins for glass - albeit at a discounted price - to use as part of the Dunedin City Council's kerbside collection system.

A staff report to the meeting of the council's infrastructure services committee this week confirmed about 890 of the city's blue glass recycling bins needed replacing.

Contractors had checked the bins and found problems including broken rims, bottoms and handholds, meaning they could break when lifted and become a health and safety concern for collection staff, the report by council solid waste manager Ian Featherston said.

"If the bin is badly cracked, there is a potential for the bin to collapse under the weight of the glass and smash on the ground or injure the operator," he said.

There were 47,000 households in Dunedin that were charged rates for the kerbside collection service, and some properties had previously replaced or repaired their blue bins, he said.

However, the number now needing replacement meant a full replacement programme, costing more than $500,000, was not warranted, he said.

Instead, ratepayers with defective bins would be asked to pay $10 for a new bin, discounted from $12, which was "fair to the residents that have purchased a replacement bin in recent times", he said.

New bins would be more robust, with an expected lifespan of 15 years, and hold slightly more glass, he said.

Older blue bins no longer able to be used could be broken up and recycled through the council's wheelie bins.