'I knew it was something significant' 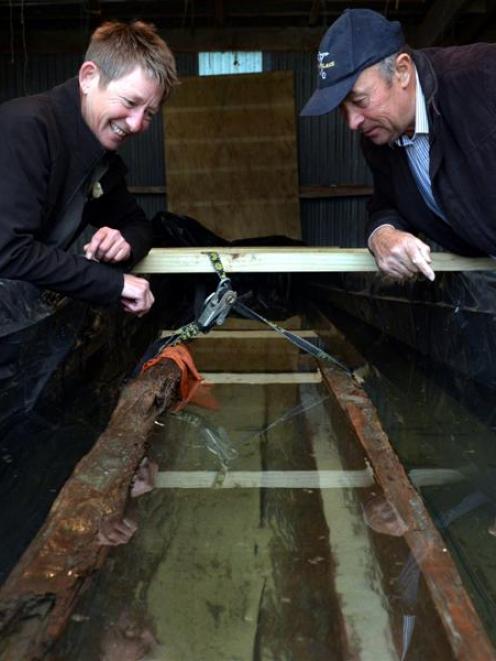 The 6.17m waka was under 1.6m of sand and was discovered by chance in August by Ms Briden.

She said the channel flow had changed, with the estuary water now cutting over the top of the waka.

''Coastal erosion may also have something to do with it.''

Just 2cm was sticking out of the sand when she first saw it.

''To most lay-people, it would just look like the top of a fencepost sticking up out of the sand.

''Because of the other waka pieces that we'd seen with that totara look to it, with adzing, I immediately knew it was something significant.

''But I didn't know what it was until we were given permission to dig down and have a look at it.

''And to see the hull shape ... It's the find of an archaeologist's's lifetime.''

The waka was excavated and refloated using whale pontoons at the weekend, and moved across the estuary at high tide to where it could be retrieved.

The waka is believed to be the only one found in Otago, and has archaeologists around the country buzzing.

Parts of it are now being tested in Auckland and Dunedin to determine its age and how it was built.

Ms Briden said the area where it was found had been carefully monitored by Doc staff since 2005, and the waka was just one of many taonga discovered in recent times.

Human remains, an outrigger float and a small trap had also been found. Ms Briden said it was too early to say what would happen to the waka, but it could end up in a museum.