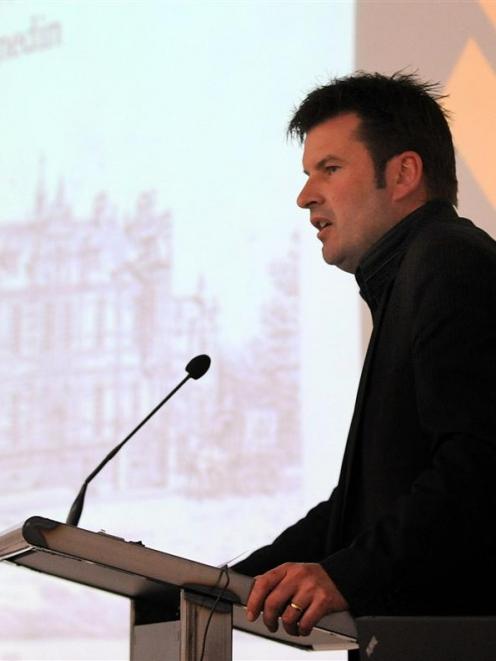 Octa Associates consultant David Booth discusses possibilities for the future of the old Dunedin Prison at a meeting of about 60 people at Dunedin Public Art Gallery last night. Photo by Peter McIntosh.
The viability of restoring and developing the former Dunedin Prison as a tourist attraction should be known by the end of the year .

About 60 people who attended a meeting last night in Dunedin to discuss the prison building's future were told the Dunedin Prison Charitable Trust, keen to restore the building, considered ventures in the complex had to be self-supporting.

David Booth, a consultant with Octa Associates which is carrying out the feasibility study for the trust, said this work would include the cost of earthquake proofing the building, which could be "potentially a show stopper".

However, trust member Stewart Harvey said after the meeting he was not too concerned about that aspect of any possible restoration, as the building was built like a "honey comb".

Mr Booth said, overall, the building appeared to be very sound, although there were some areas of "minor concern" and there was some pigeon infestation.

The feasibility study will include estimates of the costs of earthquake proofing, making the complex weatherproof, and upgrading the building for disability access including toilets, lifts, and stairs.

It will also look at possible sources of income in a staged redevelopment.

During the discussion, Dion Freeman suggested a rehabilitation centre for ex-prisoners and a place to provide education for young people was preferable to a money-making tourist attraction.

Mr Booth said the not-for-profit trust's vision was to preserve the building for all. Money from ventures within it would be used for the building's upkeep. With such a large building there could be an opportunity for many uses, over time.

Mr Booth said the trust was "in dialogue" with the building owner, the Department of Corrections, over its possible future, but agreed there was a risk someone could "turn up with a very large cheque book" and buy the building.

Mr Harvey hoped the feasibility study, expected to be completed by the end of next month, would show a redevelopment could "make sense commercially".