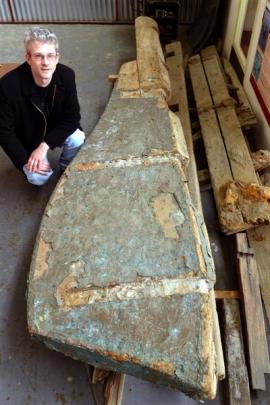 South Otago Museum curator Gary Ross with a rudder which may be related to an old anchor which was found off the Nuggets earlier this month. Photo by Stephen Jaquiery.

A mystery anchor discovered off the Otago coast this month has dredged up international interest.

The barnacle-encrusted iron anchor was caught on October 7 by Taieri Mouth fisherman Karl Maley on the Ladyann at Hayes Gap, off the Nuggets.

The find had excited international maritime archaeologists since it was revealed in the Otago Daily Times, South Otago Museum curator Gary Ross said this week.

''The ODT article really put the flag up. Aima (the Australasian Institute for Maritime Archaeology) is particularly interested in the anchor.''

It was hoped it could be related to a rudder at the museum, which was discovered in 2007.

''There are no recorded wrecks at Hayes Gap. The only connection between the anchor and the rudder, at this stage, is the area they were found in.

"A 5km difference, in shipwreck terms, is quite feasible. Shipwrecks will move quite some distance and drop bits and bobs everywhere,'' Mr Ross said.

''If it leads to anyone identifying our rudder then it's a huge success. There's a 50% chance the rudder is from the Taiaroa, which was the first steamer built in Dunedin and struck the reef in 1871.

''The Margaret Casey also hit rocks there [in 1904] and ripped its rudder clean off the pintels, which has also happened to our rudder.

The Lady of the Lake also sank in the same area the following year, 1875.

''We're trying to identify the timbers and working on measurements and scale. Without a hallmark you have to look at the materials used and scale,'' Mr Ross said.

The South Otago Museum has a similar anchor, from the first recorded wreck off the Catlins coast, of the Henry Freelingon on November 12, 1839.

''It's a 19th-century-style anchor, for sure. We'll preserve it by putting it into a fresh water tank, connecting anodes and gradually stabilising the iron,'' Dr Schmidt said.

''We're working with marine archaeologists at the moment to identify it.''