It's all a game for top Kiwi racing driver

He does not even own a car, but Dunedin man Simon Bishop is a top New Zealand racing driver.

The electronics salesman is a Gran Turismo Sport sensation, and later this month will head to New York on a paid trip to represent Toyota in the latest leg of the car racing simulation computer game's world tour.

''You qualify for these events by playing the game online in your own house, so that's what I do. I sit at home and I have my own wheel set-up,'' Mr Bishop (29) explained. 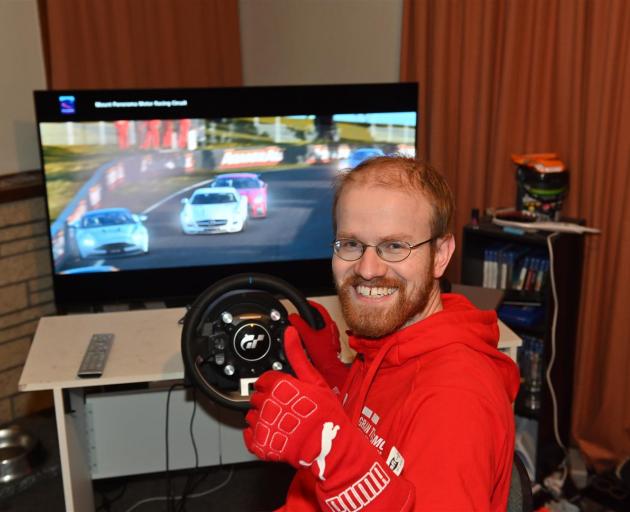 Champion Gran Turismo player Simon Bishop, at his racing console inside his Dunedin home. Photo: Linda Robertson
He had dreamed since childhood of being a racing star, and the PlayStation game allowed him to live out his high-speed fantasies, along with a taste for the jet-set lifestyle of Lewis Hamilton or Kimi Raikkonen, without risking death or spending millions of dollars, he said.

''I was recently in Germany and I'm off to New York in three weeks' time, so it's quite unbelievable ... that you could go from literally sitting at home, just on my swivel chair at home ... to be racing on these very, very expensive rigs.''

He practises for hours each night and yesterday held the hotly contested top ranking in New Zealand. 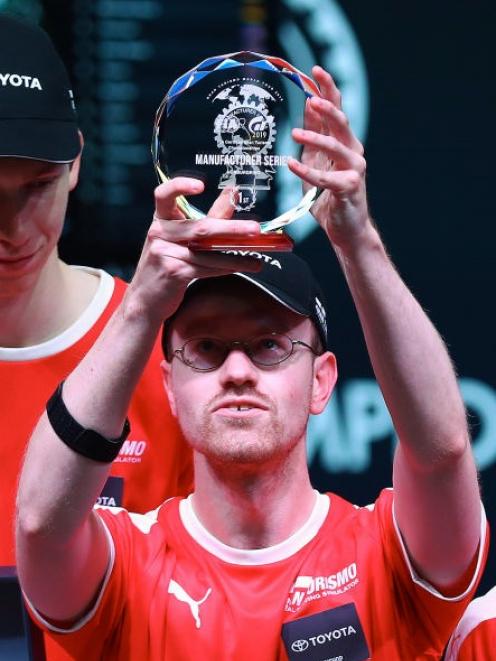 Mr Bishop holds the Manufacturers Cup aloft at the Nurburgring, in Germany. Photo: Getty Images
Rather than having to shell out hundreds of thousands of dollars on a finely tuned racing car, his costs were just $500 for a PlayStation 4, $80 for the game and $1200 for his high-end steering wheel controller.

''It allows me to live out the dream I had as a kid, without having to mortgage the house.''

As he explains it, a key difference between hyper-realistic simulator Gran Turismo and other esports, such as basketball game NBA 2K19, is the skills are directly transferable to driving real cars.

''There are people that win the Gran Turismo series and get a contract to race full-time in Europe.''

He and his Toyota team tasted victory in June when they won first place in an event held at the Nurburgring motorsports complex in Germany, which took place on a virtual version of the notoriously challenging track.

The events are live-streamed and the super-realistic graphics and uber-excitable commentary make it hard to tell you are watching a simulation. The main giveaway is a cutaway shot of the three drivers sitting in their gaming rigs.

While other esports stars earn massive pay cheques - a teenager recently took home $3million at the Fortnite World Cup - Mr Bishop gets no prize money, though free trips around the world to stay in five-star hotels are not a bad perk, he says.

''Gran Turismo doesn't pay at all, so no prize money, but you do get paid for to go all over the place, so I'm not paying anything to go to New York.''

Love it! Good luck, New York is awesome so hopefully you get time to look around.

I've raced Simon before in GT6 and GT Sport, and it's safe to say that he's not a slow driver...