It's been 'a constant battle' since flood 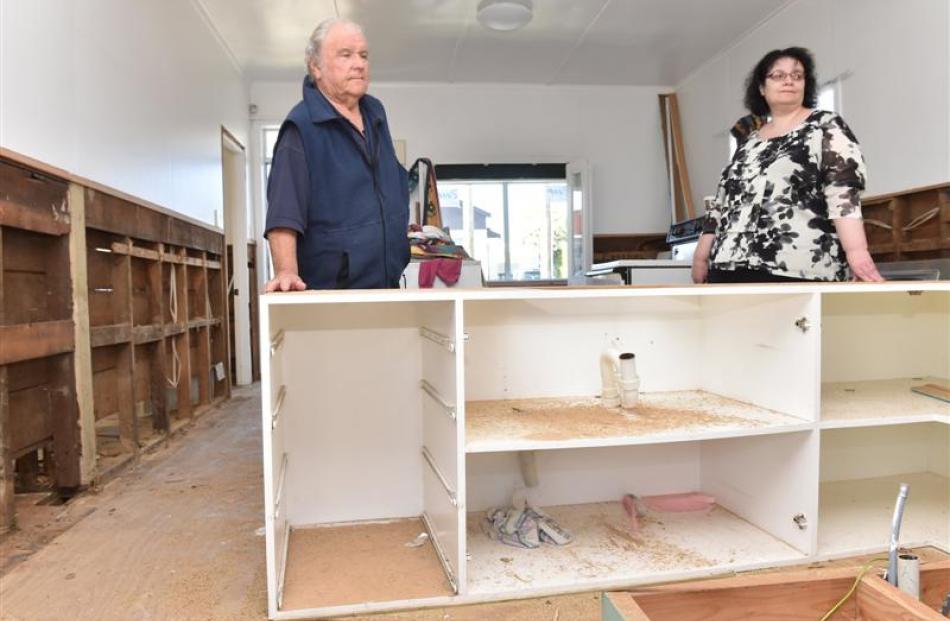 John Duff and his daughter, Jo, stand in the Nelson St house badly damaged by the June 3 flood. Photo by Gregor Richardson.

Months of stress and insurance hassles are taking a heavy toll on some people long after most have moved on from the June flood. Health reporter Eileen Goodwin looks at the welfare of those adversely affected and speaks to health authorities about what they are doing to help.

''I'm not a particularly fragile person,'' Jo Duff says, while surveying the South Dunedin house that sits desolate as she wrangles with an insurance company over its repair.

But the months since the June 3 floodwaters swept into the Nelson St house have been incredibly hard.

Her father, John, has never seen his daughter as stressed as in recent months.

The insurance claim on the house is still not settled, and she has to ''fight them all the way'', Mr Duff says.

''It's a pretty sad house when you walk into it at the moment. It was pretty modern [before the flood],'' Miss Duff says. Drained emotionally and financially, she is also feeling let down by a lack of rates relief from the city council.

''It's just a constant battle. I'm totally over the arguing. It takes up a hell of a lot of our time.''

Her aunt, who lived in the house, is staying elsewhere until it is repaired.

Miss Duff lived in the house until a few years ago. Support of family is crucial, she says, financially and emotionally.

''She's highly stressed out over it. It's the worst I've ever seen her in her life,'' Mr Duff says.

Miss Duff is coping - she is very busy with her job - but health authorities are wary of the pressures on people in whom stress can take months to build into a problem.

Some of the effects are feeding through to GPs, where there is more demand for mild to moderate mental health services, WellSouth Primary Health Network chief executive Ian Macara says.

''Even though there was enormous support from the community, and from their families and friends, there was an increase in referrals into our brief intervention service, and actually, they are continuing, because people are now worried about their insurance claims, and whether they should move house; those sorts of things,'' Mr Macara says.

Aurora Health Centre GP Dr Jill McIlraith says the winter has been severe for colds and flu-like illness, but just how much is due to the flood is unknown.

It was possible damp houses contributed to the ill health.

The flood response lacked co-ordination, and Dr McIlraith says the likes of the health board and city council should have considered appointing a flood ombudsman or similar position as a central clearance point for three to six months.

''I still think we don't have a good grasp on how the most vulnerable, poorest, non-insured families are doing, especially those where there is an overlap with mental health problems.''

Public Health South physician Dr Naomi Gough says the authority is monitoring the situation, but at this stage has no plan to produce a report or formal debrief.

''Flooding can affect health in many different ways and over a long period of time.

''It takes many months of ongoing monitoring and data analysis to learn of just some of the health impacts associated with flooding,'' Dr Gough says.

Public Health South has looked into studies from other flooded-affected areas.

''These show a link between health and flooding. However, it is not always obvious immediately after the event.

''In the long term, people living in flood-affected homes are found to be more likely to experience a range of illnesses, including respiratory illness and stress,'' Dr Gough says.

Dunedin South MP Clare Curran says health authorities should be reaching out to people in affected suburbs, and not relying on them coming forward for help.

It took months after a major event for the pressures to take full effect.

"The impacts for some people are going to take some time [to show up].

''Many people do feel abandoned.

''They were pretty much left to their own devices after the flood.''

She is calling for Public Health South to conduct a full debrief into public health impacts.

''It's a population under significant stress anyway, from inadequate housing.

''This would be a very useful thing for them to do from a public health perspective,'' Ms Curran said.