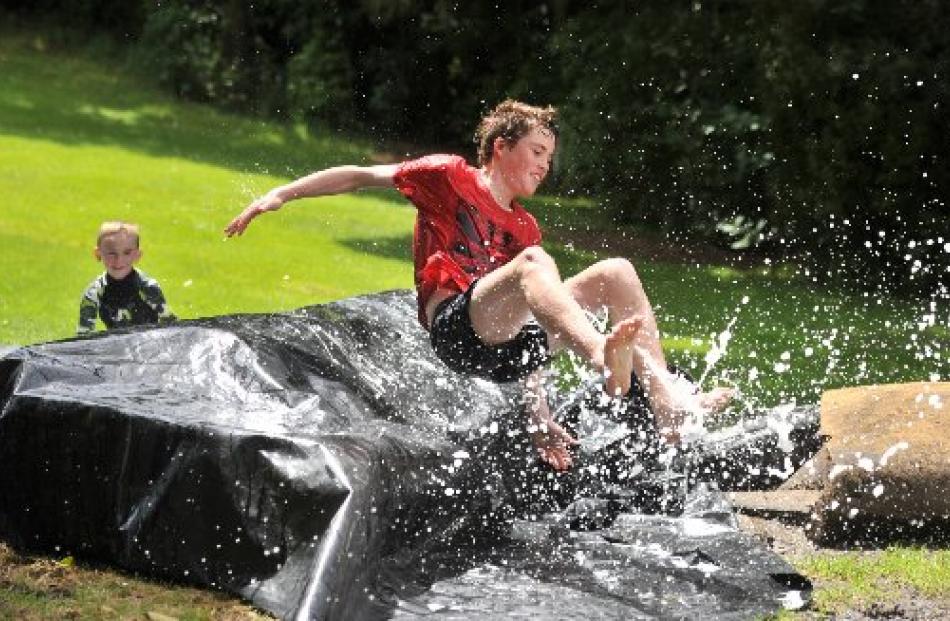 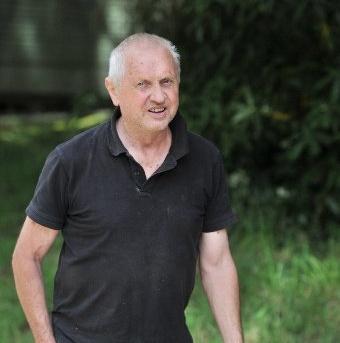 You don't have to go far to get a million miles away. A hidden world lies just 15 minutes from the centre of Dunedin. Nigel Benson visits the Waiora Scout Camp.

''Camp Run Amok - beware of feral kids and rabid oldies'' a sign on a bridge at Waiora Scout Camp reads.

Over the bridge is a home away from home enjoyed by three generations of a Dunedin family.

For the past three years, the bushclad site at the camp has been a Christmas retreat for Billy and Sandra Eckhold, their daughter, Mel Kelly, her partner, Paul Helm, and their children, Josh Rosie (15), William Helm (7) and Nicholas Helm (18 months).

This year they are also joined by the latest family edition, 5-week-old Hunter Helm.

''We used to do Christmas at home, but the family kept expanding until we didn't have room for everyone anymore,'' Mrs Eckhold said, with a chuckle.

''It's so peaceful out here, yet it's so close to home. I love the birds. When you wake up in the morning all you can hear are the birds.

"It's a simple life, but we have everything we need. And, if you forget anything, you can just go back home to get it.

''Once we get out here, we get friends arriving from all directions. I do our Christmas dinner here, so we do need to have a bit of stuff. We did the turkey in a dutch oven this year and it came out beautiful.''

The families arrived at Bridge Field last week and will return to their city lives on Monday.

''William just jumps on his bike every morning and says: 'Right, I'm off for an adventure'.

"We've even been adopted by a paradise duck. She comes up to the tents and keeps the dogs in order.''

The unflappable resident duck, Daisy, follows the kids around on their daily adventures.

Sometimes, the local rooster also joins in, making for an amusing procession of kids, bikes, dogs and poultry.

''They just go off on adventures. They all know the water rules.''

A brook bubbles behind the camp, betraying the presence of an enticing swimming hole.

''We do heaps of stuff. We play cricket, go eeling and try to catch lobsters. But the best bit is the waterslide. The confidence course is pretty cool, too.''

It is a place of ferns, moss, lancewoods and tuis, which offers adventures in native bush for children and relaxation and tranquility for adults.

''The only downfall is the boy racers doing wheelies along the road, which is not pleasant. Especially when you've got kids on bikes around,'' Mrs Eckhold said.

The camp sits in the lush Silverstream Valley in North Taieri, amid 32ha of bush and parkland, and is maintained by the Scout Association of New Zealand Coastal Otago Zone as an adventure camp and venue.

It is widely used by many community groups, such as the New Edinburgh Folk Club, which has been running the Whare Flat Folk Festival at the camp since 1975.

It is also the home of the Circulation Festival and used by everyone from the University of Otago and school and church groups, to New Zealand Land Search and Rescue for training.

The camp can accommodate up to 78 people in cabins and bunk rooms and many more under canvas.

All the camping areas have a reticulated water supply, while facilities include a conference hall, kitchens, toilet and shower blocks.

It was a busy time at the camp, with the four-day Whare Flat Folk Festival, which starts on Monday, attracting 1500 people to the camp, warden Neil Moyle said.

A Scout leader at the camp since 1972, Mr Moyle takes a particular interest in intrepid young explorers, teaching them about bushcraft and the local flora and fauna.

''Kids is what this place is all about. The more kids who come out here, the better,'' Mr Moyle said.

The land was originally part of the Flagstaff Run, which belonged to the grandfather of broadcasters Philip and Mark Leishman.

About the camp
- Waiora Scout Camp was established in 1948.
- The camp is owned by the Scout Association of New Zealand Coastal Otago Zone.
- It can accommodate up to 78 people in cabins and bunk rooms.
- Camping sites with reticulated water supplies are also available. It is popular for festivals, weddings, conferences and camping trips.

Getting there
From Dunedin: Travel up Stuart St and Taieri Rd, into Three Mile Hill Rd. Turn right into Silverstream Valley Rd, which is signposted with a Waiora Scout Camp sign. The camp is about 5km along the road.

From the south: Travel along SH1 to Mosgiel and turn left into Gordon Rd. At Dukes Rd, turn right and travel about 5km to Silverstream Valley Rd, which is signposted with a Waiora Scout Camp sign. The camp is another 5km along the road.