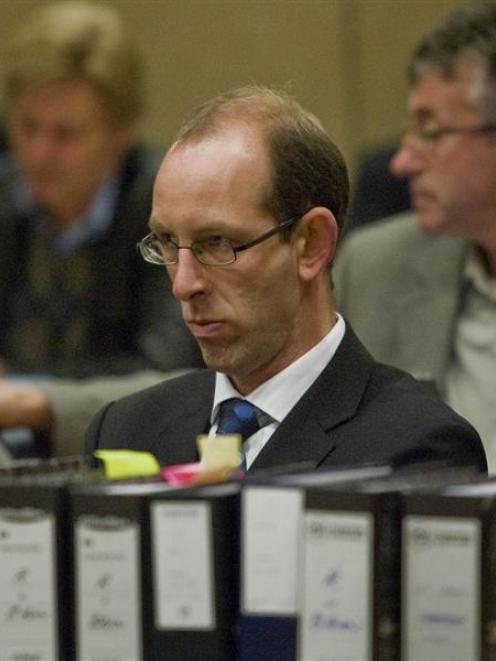 David Bain at his retrial in the High Court, Christchurch, on Wednesday. Pool Photo.
David Bain will not give evidence in his defence at his trial on charges of murdering five members of his family in Dunedin in 1994.

That was made clear by defence counsel Helen Cull QC as the defence opened its case this morning on the 41st day of the trial before Justice Graham Panckhurst and a jury in the High Court at Christchurch.

Mrs Cull said the defence would call about 50 witnesses, including eminent doctors and scientists from overseas. The defence would "call evidence the police should have called".

She told the jury they had already heard all the interviews that Bain gave to the police in the days after the killings.

Unusually, they had also heard all the transcripts of his evidence at the 1995 trial read in court.

But she said that now that it was 15 years on, there was nothing more that Bain could contribute.

"He always maintained his innocence, and he still does," she said.

She said the crown evidence had not excluded Bain's father Robin as the killer.

Mrs Cull began her address by thanking the jury members on behalf of David Bain and the defence team for their patience, care and attention.

The court resumed today in closed session with Justice Panckhurst giving his ruling on a legal matter, and then some crown evidence was replayed at the jury's request.

This was David Bain's 111 call, and the jury then saw part of the police video taken after the killings of the scene at the family's home in Every Street where Bain's father and mother, two sisters, and his 14-year-old brother lay dead.

After the defence opening address, the court adjourned for further legal argument.

The jury was sent away for the calling of defence evidence to begin at 10am on Monday.