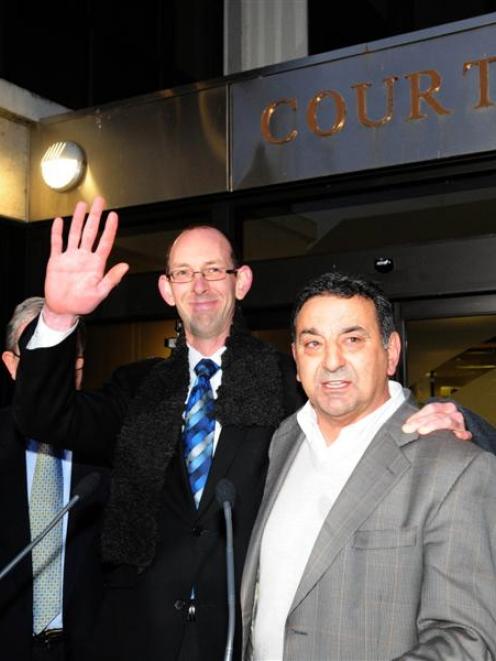 Bain with supporter Joe Karam in this file photo.
David Bain flew out of New Zealand at the weekend headed for his OE and the anonymity of the United Kingdom.

It was also revealed he is planning to seek compensation and stake a claim to his family's inheritance.

"He's very conscious of the fact he might be able to make a more pleasant life for himself somewhere he isn't under scrutiny," long-time supporter and defence campaign mastermind Joe Karam told reporters.

On June 5, Mr Bain was acquitted - on retrial - of murdering his parents, sisters and brother in 1994.

He had served 13 years in prison before his original conviction was overturned by the Privy Council in London.

Flying business class for part of the trip, Mr Bain was excited and relaxed when he checked in at Auckland International Airport on Saturday morning.

He had two backpacks, one carrying a tag for Shamrock Adventures, a budget tourist operation in Ireland.

Mr Karam said Mr Bain was heading to the United Kingdom to stay with friends.

Mr Bain planned to travel through Britain with his friends and was intending to explore his family roots in Scotland.

He has also planned a long holiday in Greece to indulge a long-held fascination in classical studies.

"He is interested in looking at employment and study in the UK and elsewhere in Europe," Mr Karam said.

Mr Bain was not against living in New Zealand but wanted to explore other opportunities.

He struggled with his public profile and was "sick and tired of being recognised".

Mr Bain was treated extremely well by members of the public, but he found the constant media interest exhausting, Mr Karam said.

Mr Bain was able to make the trip through "the generosity of others", he said.

He was also able to change the return date on his $5000 ticket but at this stage expected to be back in New Zealand for Christmas.

Mr Karam confirmed that Mr Bain was planning to claim compensation as well as stake a claim to his family's inheritance.

Mr Bain's legal team was "being organised" to fight for compensation, he said.

The Bain family owned their Every St home in Dunedin, which was deliberately razed at the surviving family's request.

They also owned sections in Whangarei and Bundaberg, near Brisbane, plus had about $60,000 invested and a large sum in an overseas bank account.