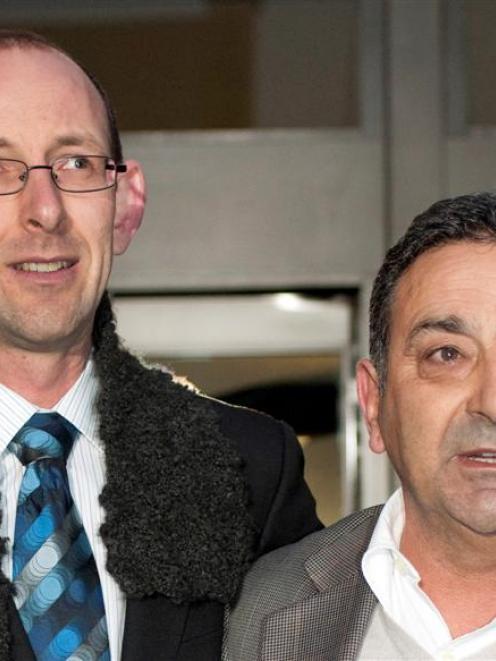 David Bain, left and his supporter Joe Karam emerge from the High Court after Bain was found not guilty of the murder of his family. Photo by NZPA
A group of people who believe David Bain killed his family are launching a fight to prevent him getting any compensation or inheritance money.

Mr Bain, who spent 13 years behind bars for the murder of five of his family members in 1993, was adjudged not guilty of the murders at a High Court retrial ending in June.

Mr Bain's supporters, who say his father Robin killed the family members and then took his own life, have said they would seek compensation from the state for his years in prison.

But Justice For Robin Bain, formed from the Facebook group David Bain Is Guilty, is lobbying to prevent this happening.

Spokesman Kent Parker said a website had been set up and a petition would be started.

Letters had also been written to Justice Minister Simon Power, who will decide whether compensation should be examined.

"We believe the evidence overwhelmingly points to David as the murderer, and that he should not make money from what he did.

"An acquittal based on spurious `what if?' scenarios is not an argument for innocence."

Mr Parker said the group had no connection with any parties in the trial, or to Bain's family.

Mr Bain must apply to the Justice Minister for compensation, after which the matter may be referred to a Queen's Counsel for investigation.

Unlike in the trial, where prosecutors had to prove beyond reasonable doubt that Mr Bain was guilty, Mr Bain has to prove he is innocent on the balance of probabilities before he can gain compensation.

Joe Karam, who spearheaded the long battle to free Mr Bain, said last week Mr Bain would be able to do that and comments to the contrary were ill-informed.

"The evidence in the trial, I am saying, supports unequivocally that David Bain, on the balance of probabilities, is innocent of these crimes," he said.

The amount of compensation takes account of the length of jail time served and the claimant's conduct. The base rate for each year served is $100,000.

Mr Bain is also expected to try to claim his family inheritance.