Korean immigrant doing it herself 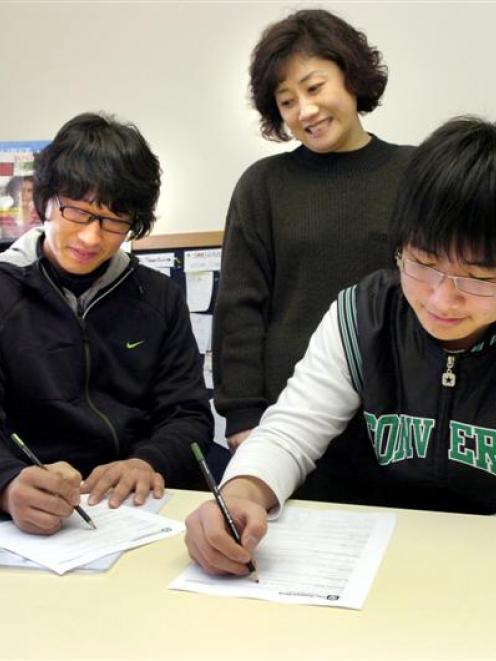 Francesca Shin assists Korean students Lee Deokjae (25), left, and Nick Yu (15) with opening bank accounts as part of her new business, which helps to establish Korean immigrants in Dunedin. Photo by Jane Dawber.
Why follow a career path when you can create your own?

South Korean immigrant Francesca Shin is one of a growing number of people who have asked the question and found themselves setting up their own businesses in Dunedin after taking courses at the Maverick School of Languages.

Mrs Shin (48) moved to New Zealand in 2001 with her two children so they could be educated in an English-speaking school.

In today's society, it was important for children in Korea to be able to speak English because it was commonly used in the business world, she said.

"I wanted to give my children the best opportunities for future careers and we saw New Zealand and its education system as the land of opportunity."

However, soon after she arrived in Dunedin, it quickly became apparent that her inability to speak English was making life difficult.

"Being a foreigner, being female and being the age I am - it was hard to find a job. My husband, who still lives in South Korea, had to work very hard to support us."

Despite the adversity, Mrs Shin was inspired to learn English and, after a chance meeting with Maverick School of Languages managing director Rick Kelty, she began a part-time course in small business management at the school.

Although she has not finished the course yet, she has already discovered she can use her English, Korean and Japanese language skills to become her own boss.

"I thought, 'Forget about finding a job. I'll create my own business'," she said.

"Basically, I bring students from Korea to study in New Zealand schools and universities. I help get them established in New Zealand."

Since she established her business, Carefran Agents Ltd, two months ago, Mrs Shin has brought five Korean students to Dunedin and hopes her own experiences settling into New Zealand life will be invaluable to her clients.

She now plans to expand her business to relocate Japanese students also.

Mrs Shin said the Maverick School had opened many doors for her and she felt lucky to be able to provide a source of growth to the Dunedin economy.

Mr Kelty said 15 people had graduated from the 36-week certificate in small business management course since 2006 and all were at various stages of setting up their own businesses.

As a result, new gymnasiums, restaurants, cafes, dating services, web design agencies and engineering companies had been set up.

Mr Kelty said the courses were open to anyone but they were popular with immigrants who had struggled to find employment in Dunedin.

"Dunedin's employment market is difficult to break into for locals, let alone migrants.

"It seems to be a city in which it's not so much what you know, but who you know. A lot of Dunedin business people prefer to employ people they know.

"If you've worked for a recognised company, your credibility goes up because employers can call them to check your work history.

"But the history of immigrants is difficult to check. That's why they struggle."

Otago Chamber of Commerce chief executive John Christie said it was encouraging to see 15 new businesses start in Dunedin and it bode well for the local economy.

"Because they are from other countries, they are bringing with them new ideas, new contacts and new ways of doing things, which is very exciting."