A roof leak has forced the coming production of Treasure Island out of the Albany St theatre and into Logan Park High School.

Dunedin Repertory Society Committee president Jemma Adams said Covid-19 restrictions meant the theatre society was unable to rehearse for or stage the show earlier in the year, and a roof leak that worsened during lockdown meant it needed to find an alternative venue for the production.

"[This] is the first time we have ever had to cancel a children’s theatre show or stage it elsewhere.

"We even went on in snow when the leading lady for Alice in Wonderland had to be picked up by a four-wheel-drive ... when a key cast member was knocked over and broke her arm in a lunch break the show still went on."

The theatre was grateful to Logan Park High School for sharing its auditorium.

"It’s a great venue, big enough to fit a pirate ship, and will allow the show to go on even if we’re still at Level 2."

The show will be held during the school holidays between September 29 and October 4.

The society hoped to have the Playhouse Theatre’s roof replaced as soon as possible.

Plans were given a boost last month when the Dunedin Heritage Fund approved a grant of $40,000 for repairs at the theatre.

"That was wonderful news for the Playhouse," Ms Adams said.

"It will allow us to have the theatre back in operation, hopefully by early next year."

The society was in the early stages of a project to fully refurbish the 136-seat theatre for the longer term.

"The Playhouse is a special part of Dunedin’s theatre landscape, not just for our children’s theatre, but for a variety of amateur and professional performing arts groups.

"We hope to ensure the city can enjoy it for many years to come."

The Albany St site was converted into a theatre in the 1960s and the Repertory Society bought it about 1971. 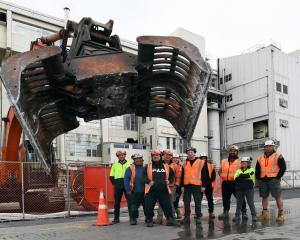 Students get paid to destroy classroom