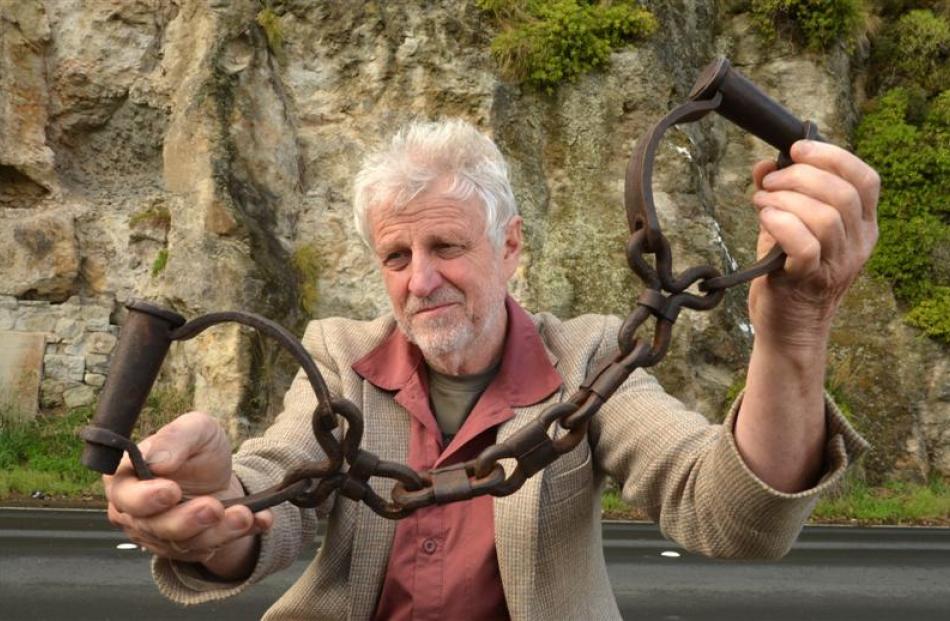 Hayward's Auction House owner Kevin Hayward holds forged leg irons outside the Dunedin cave from which they were removed in the 1970s. Photo by Stephen Jaquiery.

Hand-forged leg irons that might have been used to restrain Maori political prisoners in Dunedin will go under the hammer in Dunedin tomorrow.

Steve McCormack (60), of Dunedin, said he put the irons up for sale at Hayward's Auction House in Dunedin.

He and his late brother had used a hacksaw to remove the hand-forged leg irons from a cave in Portobello Rd in the early 1970s.

The cave had at that time housed many wrist and foot shackles but the rest had ''rotted away'', he said.

Mr McCormack said he had worked at the Hillside Engineering Workshops and used its furnace to preserve the leg irons, which appeared to date from the early 1800s.

He was unsure who the leg irons had restrained but he was sure they had been used in the Portobello Rd cave.

''No question about it because every one of those caves had the steel rings pressed in to the floor to chain prisoners to.''

He was expecting big bids at the auction tomorrow.

Otakau runanga elder Edward Ellison said Maori prisoners were taken from Taranaki and forced to labour in Dunedin between 1869 and 1871 and helped build the Andersons Bay causeway and road.

It was unknown if Maori political prisoners were restrained with leg irons in Dunedin caves.

''There is evidence they were in the caves. How they were restrained is more likely by a locked door than leg irons.''

Although the caves were not a recognised historic site in the early 1970s, the leg irons should not have been removed, he said.

''There is people with a level of attachment to the issues surrounding their ancestors that were held, without trial, in places like that so it is a bit insensitive to be selling them without giving the opportunity to be purchased and housed in the country.''

Hayward's Auction House owner Kevin Hayward said if the leg irons sold tomorrow, any new owner, if they wanted to take them out of the country, would need an export certificate.