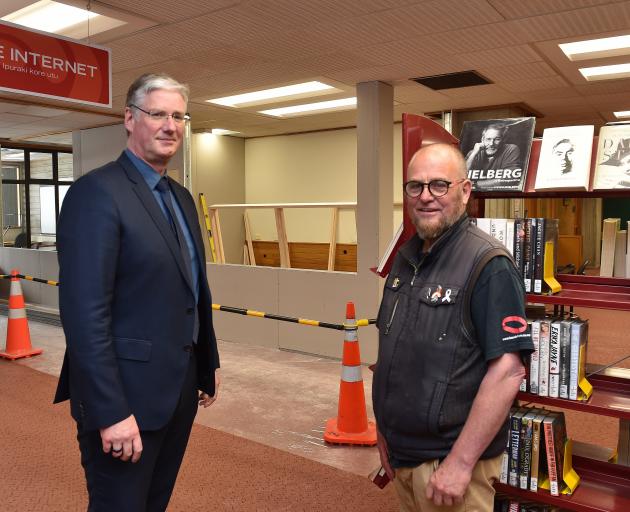 Prominence given to the Islamic faith may be dropped.

Even as construction of the area on the first floor of the library continues, the final format is far from determined.

The Dunedin City Council has received mixed feedback since it announced plans to create an interfaith or interdenominational prayer room and separate Muslim space, and council staff have signalled they are open to changing the concept.

Community services general manager Simon Pickford said two rooms were being set up as a quiet, reflective space, but the detail was always going to come later.

The aim was to create an inclusive, interfaith space that met the needs of an increasingly diverse community.

His comments — not quite the same as the council’s initial publicity, which proposed a Muslim room featuring a curtain that could be drawn to separate men from women — followed a member of the public suggesting an alternative concept at a Dunedin City Council meeting yesterday.

Paul Gourlie suggested having an interfaith room and another room where women could meet separately.

He said the council initiative was laudable but he was not comfortable about drawing attention to one particular faith group.

Mr Gourlie is the Dunedin Abrahamic Interfaith Group chairman and a Muslim, but said he was speaking as an individual or as a representative of the AoNZ Peace Embassy.

He understood the prayer area was partly a result of the Christchurch mosque shootings last year and recognition of the need to foster an inclusive society.

He thought the idea was well intended but was not sure the original concept achieved the aim of being inclusive.

Mr Gourlie told the Otago Daily Times that creating a separate space for Muslims could be counterproductive.

"By making a separate place, you may give strength to those people who are looking to find an issue."

However, the willingness to put forward the proposal showed maturity, he said.

Mr Pickford confirmed the initial plans were not final and the concept promoted by Mr Gourlie would be given serious consideration.

The idea of a prayer room came out of a visit by council staff to Dunedin’s Al Huda mosque last year.

Mr Pickford said he was aware Muslim pupils studying at the library had to improvise to carry out their afternoon prayers, sometimes using the bathrooms.

Dialogue would continue about creating an inclusive, quiet space for reflection, he said.

There had been a range of feedback and the council was open to modifying the proposal, he said. Some people were not comfortable with the creation of a religious space in a public building. But New Zealand had become more diverse and libraries were community centres.

Librarians please, if anyone comes into the library and asks for the nearest place to worship please advise them that the reference section will have maps to show the location of the nearest church, temple, mosque, chapel, cathedral, friends meeting house or whichever franchise they seek. Libraries are a place for books and seekers thereof.

Great, so now ratepayers are funding gender discrimination. Segregation based om gender is not ok. I would have thought that the Human Rights Act would be enough of a rule book to go by here in Dunedin?

The whole world is a religious space, so any space set aside becomes an issue in which one group may feel left out or that one or many groups get special areas set aside for them. Discrimination then becomes the cry. Why not just allow Muslims to bring prayer mats? Why do we have to have a prayer room at the library?

Muslims are obliged to pray in a special way, in a special posture. Everyone else can pray silently anywhere. When the library is being used for study it is reasonable to provide a place for Muslims to conduct their religious observances, convenient for them and out of the way of other library users. There is no conceivable reason, other than a nervous desire to avoid accusations of preferential treatment of Muslims through "equality", to provide worship space for other faiths. It is not discriminatory to provide special facilities for those who need them. Disabled toilets are bigger, have wider doors than usual. Does this mean all toilets should be enlarged so that non-disabled, non-wheelchair users, don't feel left out? Library "real estate" is too precious, too valuable in its intended purpose, to be frittered away for a fashion for performative "inclusiveness".

If you visit your average library nowadays, books are only one of many services offered. In the Christchurch library there are recording studios, sewing machines, coffee, etc. A prime function of libraries these days is for social contact.

"The idea of a prayer room came out of a visit by council staff to Dunedin’s Al Huda mosque last year."

What a surprise. So someone or some special interest group proposes an "idea". Seriously? Is that all it takes? Well then it behoves all who oppose this nonsense to speak out.

Our public libraries are not places of "worship". How ironic it should be proposed or even considered appropriate for a library. Libraries are public places where people can gather, but this is more in the spirit of learning, investigation, knowledge, literature, poetry. A Public Library in a secular society is no place for religious "worship" or superstition. If people want to pray to imaginary beings that is their right, but not in a public place. There are churches and a synagogue and a mosque available for that.

Our civic authorities ought to find some moral fortitude to resist instead of facilitating this nonsense, which to non-believers by the way, is an insult and an outrage.