Life is a cabaret for the new Mr Glad 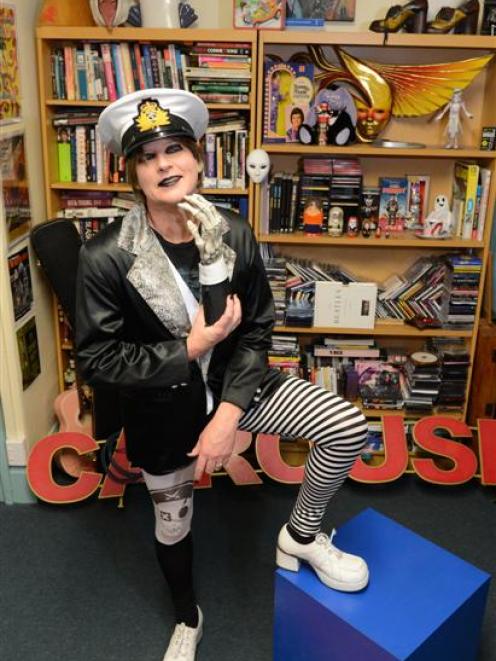 Ian Chapman hopes to turn audiences on to cabaret music at his first concert as Mr Glad. Photo by Linda Robertson.
Meet Mr Glad. He is the anagrammatic cousin of Dr Glam - the musical alter ego of University of Otago contemporary music lecturer Dr Ian Chapman.

For the past year and a-half, Dr Chapman has been in self imposed silence after killing off Dr Glam.

Now, after finishing writing a couple of books, he is glad to get back on stage with his new performance persona.

''I thought it was time for Dr Glam to go, because I think while he was great fun, it's the nature of glam rock that you shouldn't linger too long with the one persona.

''A glam rock star is supposed to shoot up into the sky and burst into a thousand fragments and not be seen again. That's what I did with Dr Glam.''

''Dr Glam, by the very nature of his name, was all about glam rock which locks you into one specific genre.

''Mr Glad is more of a cabaret figure and is not locked into one particular style. It means you can put all sorts of different styles into a show.''

Despite being called Mr Glad, which conjures expectations of audiences being made to feel glad at his concerts, Dr Chapman said he wanted his concerts to run the full spectrum of emotions.

''I want to make my audiences laugh and I want to make them cry, so there will be some outright happy, celebratory songs as well as some questioning and challenging songs, and of course some sad songs.

''Mr Glad is much more provocative than Dr Glam was.

One of the up sides of being Mr Glad was dressing up was much less time consuming than when he was Dr Glam.

''As Dr Glam, my skin was covered in silver paint, my body was covered in Lycra and Spandex. There was no part of my body that could breathe some nights.

''Thankfully there were no health issues from that. My skin is very tolerant and I used good makeup - that was the trick.''

Mr Glad will be launched next Wednesday, at a lunchtime concert in Marama Hall.

He will be joined by his new band, the Skeleton Family (Nick Hollamby, Metiria Turei and Sarah Williamson) and some guest artists on clarinet and musical saw.

A public concert will also be held at Purple Rain, in Princes St, next Friday at 8pm.