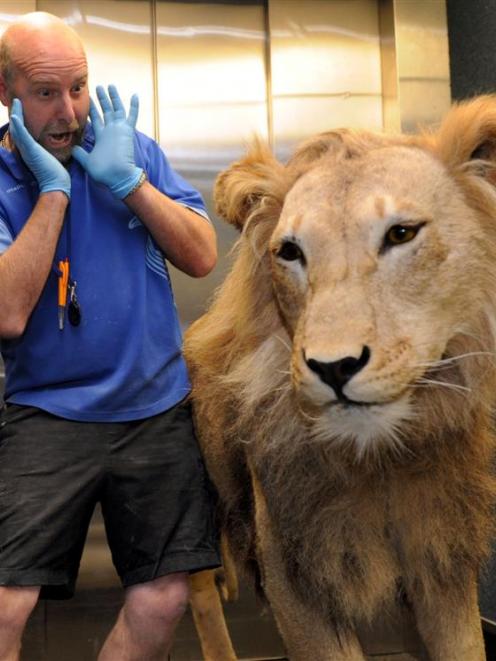 Otago Museum production and projects officer Garry Gibson feigns fear and surprise yesterday as he helps transport Sultan, a mounted former circus lion, back to the museum's Animal Attic, using a museum service lift. Photo by Stephen Jaquiery.
Two of the most-loved animals at the Otago Museum, the Lawrence lions, will occupy pride of place when a "refreshed" Animal Attic gallery reopens to the public later this month.

The lions, Sultan and Sonia, were shot by police for safety reasons after they escaped from a travelling circus following a performance at Lawrence, on March 30, 1978.

The lions have since been popular exhibits at the museum and and are being shifted from a large side display case to a much more prominent spot in the gallery's central mezzanine area.

The Animal Attic has been closed for the past two months for repainting.

Descriptive scientific material about exhibits has also been updated, including 2179 labels, and three more traditional-style table display cases have installed.

The attic gallery, which earlier had been long closed to the public, was reopened in 1996.

The attic's large and colourful collection of animal artefacts, comprising 2726 objects, was temporarily moved elsewhere in the museum before the recent repainting.

Creatures great and small, including a giant Australian groper, which is about 2m long, are being returned to the attic before its reopening on June 21.

And Sultan was on his way back up in the world again yesterday, after being returned to the attic, which occupies the top floor of the original museum building, via a service lift.

The gallery opened in 1877 and reflects the architecture, display techniques and scientific thinking of the Victorian era.

Museum experience and development director Clare Wilson said the familiar animal exhibits would still be there, but with a fully carpeted floor and a pram park, given the attic's popularity with young families.