'Living jewels' out on display 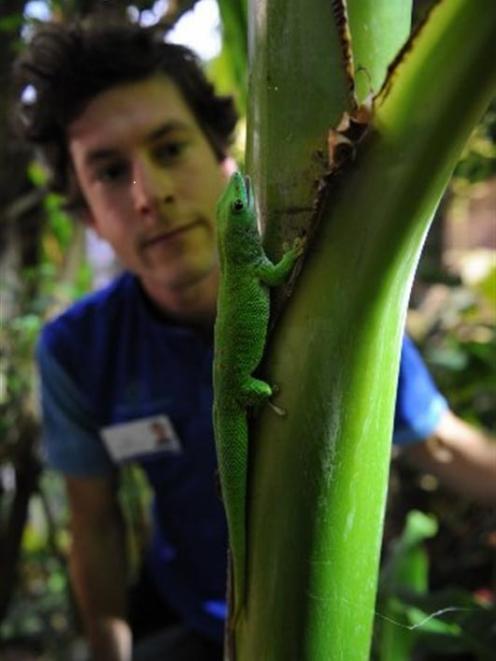 The geckos, which can grow up to 30cm in length, are bright emerald green, with red marks on their heads.

The attractive colours have earned them the nickname "living jewel".

The new arrivals, one male, one female, may eventually breed, museum officials say.

Unlike most geckos, these lizards are most active during the day, sleeping at night.

They require temperatures above 15degC and were flown from Auckland Zoo to Christchurch in the heated cargo hold of an A320 aircraft.

Because A320s with heated holds did not come as far south as Dunedin, museum living environments co-ordinator Scott Kerr drove the lizards south in a car - with the heater on.

"These stunning geckos are a fantastic addition to the tropical forest," Mr Kerr said.

Museum director, exhibitions, planning and development Clare Wilson said this was one of the most significant developments since the tropical facility opened in November.

The facility had remained consistently popular, having attracted 120,000 visitors.

Using thousands of microscopic hooks on each toe, they could climb up glass, as well as trees.

Transport permits were required to move the geckos, which had to be be housed in a registered containment facility, such as the tropical forest.

They would also be fed pureed baby food and small live insects.

The butterflies were too big for the geckos and it was unlikely they would be eaten, Mr Kerr said.

"But if we come back in in the morning and there are no butterflies flying, we'd be a bit worried," he said.