Huia Ockwell presents a British War Medal to Margaret McMaster, whose uncle William Manson served in World War 1. PHOTO: PETER MCINTOSH
A war medal long forgotten is at last in the hands of a Dunedin woman whose uncle was killed just before World War 1 ended.

"Thank you very much for going to the trouble of finding me," Margaret McMaster (90) said as the medal was handed over to her.

The man who gave the British War Medal to her yesterday, Huia Ockwell, had been in touch with Medals Reunited, a service dedicated to connecting medals with families of the people who earned them.

Getting William Manson’s medal to the most appropriate home took years and involved twists and turns.

The medal may well have been a child’s "show and tell" item at a school many years ago, and perhaps rested in the drawer of a principal’s desk and then at the Chatsford retirement village in Mosgiel.

It ended up with Mr Ockwell there. Progress in finding family happened when Medals Reunited founder Ian Martyn traced the family tree.

He found Dunedin couple Dave and Chris Cannan and they then got in touch with Mrs McMaster.

Corporal William Manson was born at East Taieri and raised in Baldwin St, Dunedin, with four brothers and sisters.

He embarked on the troopship Navua on February 5, 1916, at Port Chalmers and travelled to Suez. He arrived in France in April 1916 and soon had his first experience with mustard gas. 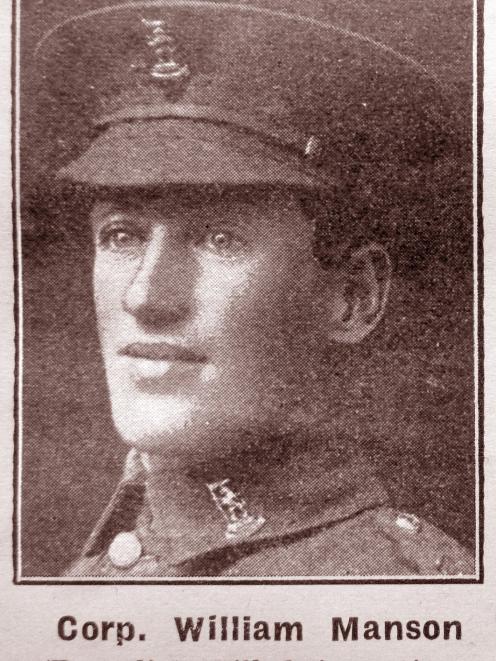 He survived such battles as Messines, Passchendaele and Bapaume.

However, during the New Zealand Division’s final push, as victory in the war loomed, the machine-gunner received gunshot wounds on November 4, 1918, and died two days later, aged 30.

The British War Medal 1914-1918 recognised the successful conclusion of World War 1. Cpl Manson’s medal, like the others from that war, included his regimental number, rank, initials, name and service formation.

He was also awarded a Victory Medal, listed as missing by Medals Reunited.

"He knew my interest in military history," Mr Ockwell said.

"He handed me the medal and said ‘you’ll know what to do with this’."

The medal had, apparently, been brought to school by a pupil, left behind and forgotten about and later handed in to Mr Bodkin.

Mr Ockwell did not have much luck finding family until he contacted Medals Reunited.

He said it was an honour to give the medal to a grateful Mrs McMaster.