Lorikeets on the loose in Dunedin 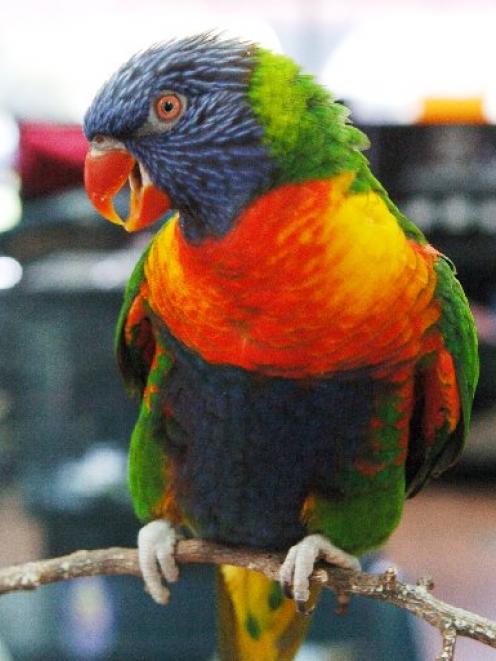 Gary, an 8-year-old female lorikeet, sits on a her perch at Pet Planet in Dunedin. Photo by Gerard O'Brien.
Rainbow lorikeets, distinctive multicoloured parrots with a blue head, which threaten native birds and the horticultural industry, have been sighted in the wild in Dunedin.

The parrots, which are listed as unwanted organisms by Biosecurity New Zealand, have the potential to increase in numbers quickly, compete for nest sites and food with birds such as tuis and kaka and can damage fruit crops.

It is legal for bird fanciers to hold and sell the birds.

In recent weeks, the Department of Conservation had dealt with three sightings of the birds, which were often confused with the eastern rosella.

One was at Outram, where the bird was captured privately and sold after its owner could not be found, another in Northeast Valley, where pet birds were allowed to roam free, and a third sighting of the parrots at Balmacewan golf course.

In 2002, five of the Australian birds escaped from a Mosgiel pet shop. Most were not recovered.

Doc ranger Graeme Loh said four lorikeets had been identified at Balmacewan and he hoped to try to capture them in coming weeks.

He was making inquiries to see whether anyone had lost the birds.

The parrots had recently become established in the cooler-weather city of Canberra in Australia, so it was worrying when the 30cm-long birds were seen here in the wild, he said.

The owner of the Northeast Valley lorikeets had been spoken to and was now aware of the need to keep them secure.

Biosecurity New Zealand pest management adviser Jaap Knegtmans said the birds had been deliberately and illegally released in Auckland in 1999 and had established a population of 150-200 in the wild.

More information on how to identify a rainbow lorikeet can be found on www.biosecurity.govt.nz/pests.