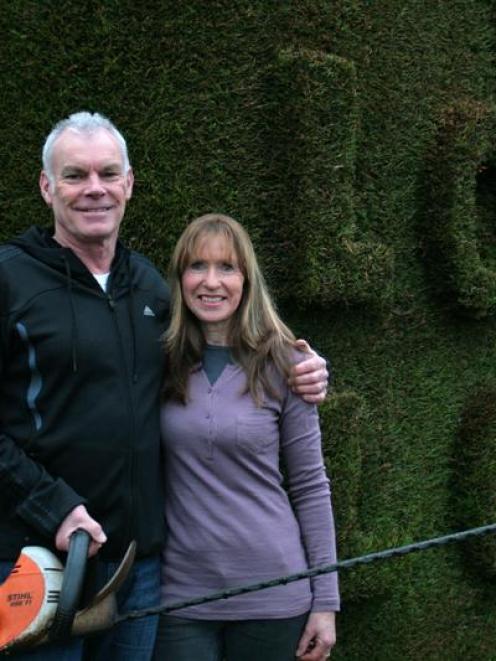 Etched into the end of their neatly groomed macrocarpa are the words "I Love Lois", which have remained as perfect as the day they were first pruned, 10 years ago.

"When it does get a bit woolly, people come and say 'are you all right'," Mrs Skellett said.

They are all right and now the Warrington couple have little bits of their love hedge to give away, on cards, in exchange for a donation to the Otago Community Hospice.

Mr Skellett said the message was "an impulsive expression of love".

He said the technical aspect of the message was interesting for the men who stopped to look at it because it was all done with clippers, while women appreciated the romantic side of it.

"It was easy to do the first time. It is the maintenance that takes the time - just like when you say 'I love you'," Mr Skellett said.

Mrs Skellett said she was "overwhelmed and completely surprised" when she first saw the message and people had been stopping and commenting about it ever since.

The owner of the Stihl Shop in Andersons Bay Rd, where Mr Skellett gets his trimmers serviced, was the first to give several hundred dollars to the cause.

- Anyone wishing to support the Love Hedge Hospice fundraiser can send a self-addressed envelope to 'The Otago Community Hospice, Love Hedge Fundraiser, PO Box 8002, Dunedin' along with a donation of any size. A card, signed by Lois Skellett, with a photo of 'The Warrington Love Hedge' and a small sprig of the hedge, will be posted to the sender.