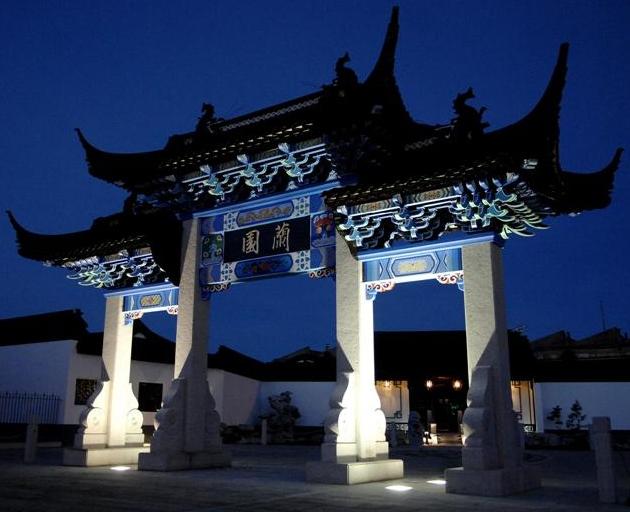 Night illumination brings out detail on the elaborate archway, or Pai Lou, which leads to the Dunedin Chinese Garden. Photo by Stephen Jaquiery.
The man allegedly behind three armed robberies of a Dunedin dairy, which left the owner upset and wanting out of the business, was arrested by police last night.

The Mornington Night 'n Day was robbed yesterday by a knife-wielding masked man at 7.15am. The dairy was also targeted on August 25 and November 14 last year.

Detective Sergeant Rob Hanna confirmed the arrest of a 37-year-old man, who would appear in the Dunedin District Court today.

The man faces three charges of aggravated robbery in relation to the store.

Before the arrest, dairy owner Qian Sun told the Otago Daily Times she wanted to sell the shop as it was robbed too often.

''Mornington is not a good area.''

It was the fifth robbery of the Eglinton Rd shop since she bought it about a year ago.

She planned to sell the shop if there was a buyer because it was robbed too often, she said.

The female shop assistant working during the robbery, which occurred about 7.10am, was ''OK'' but shaken, she said.

Det Sgt Hanna would not comment on the owner's assertion she had ''lost trust'' in the police. The dairy owner was unaware of the arrest when contacted last night and declined to comment further. In the latest robbery, the man is alleged to have entered the shop with a large knife, about 20cm long, possibly with a white handle, and demanded money. He took a small amount of cash and tobacco and exited the back of the shop in Henderson St.

His face was disguised with material and he carried a red material shopping bag.

Other business owners spoke in support of the suburb.

Bakers Dozen owner Alan McCutcheon said that he had owned and operated the Mor-nington bakery for 24 years and, although police never caught an arsonist who set the bakery on fire in 2011, they quickly located the person who robbed the bakery about two years ago.

Mornington Veterinary Centre owner John Keenan said he had practised and lived in Mornington for 13 years and had not noticed any marked ''deterioration'' of the suburb.

''There's no graffiti, vandalism or excessive amount of rubbish lying around. That store just does seem to attract that kind of thing, unfortunately.''