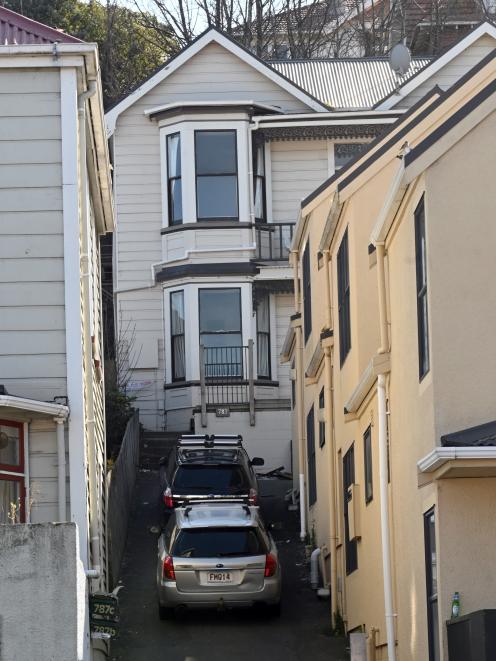 A fire broke out at this house at the top of a George St driveway on Saturday night. Photo: Linda Robertson
A Dunedin man who woke to find his bedroom filled with smoke, then apparently sought help via a group chat on social media, was lucky to escape, a firefighter says.

A serious fire, believed to have started from the remnants of a bonfire on a balcony, broke out at the George St property about 10.30pm on Saturday.

The man, in his 20s, was taken to Dunedin Hospital on Saturday night in a moderate condition.

Willowbank Station Officer Pete O'Shea said the man was intoxicated and had been put to bed by his friends earlier in the evening.

As he slept, it appeared fire spread from the remains of the bonfire on the balcony to the cavity of his second-storey bedroom wall.

There were two particularly concerning features of the fire: the house had no working smoke alarms; and when the man woke up, he texted a group chat saying ''help my room's on fire'' and sent images of the smoke to his friends rather than calling 111 straight away.

The fire underscored the importance of having working alarms - and of calling the fire service rather than seeking help on social media, Mr O'Shea said

The man was fortunate to escape carbon monoxide poisoning.

Crews from Central Dunedin and Willowbank stations were called to the fire at 10.40pm on Saturday, and after they arrived extra resources from Roslyn and St Kilda were also called in.

Although the fire was originally deemed to be suspicious, Mr O'Shea said that was no longer the case. He described the balcony fire as ''careless'' and ''daft, reckless behaviour'', but he was not expecting any charges to be laid.

Detective Sergeant Chris Henderson said the man had since been discharged from Dunedin Hospital.

A scene guard was in place yesterday while inquiries were carried out by a Fire and Emergency New Zealand fire investigator and the Dunedin CIB.