March in city one of driest with 20% of normal rain 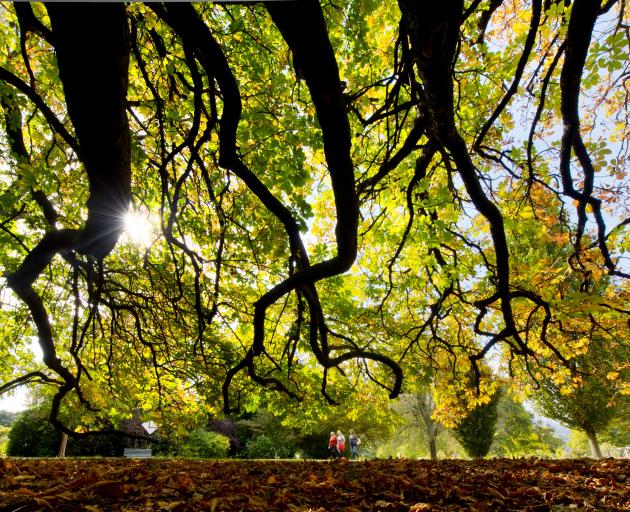 Visitors to the Dunedin Botanic Garden enjoy the mild autumn conditions as they stroll past an aged horse chestnut tree in the lower garden yesterday. PHOTO: GERARD O’BRIEN
About a thimbleful of rain is all Dunedin recorded last month, the latest Niwa weather statistics show.

The area is starting to look a little parched after one of the driest Marches on record.

Niwa meteorologist Tristan Meyers said there were bouts of heavy rain for the west of the South Island, but it was very dry in the east — particularly in some parts of Otago, which recorded at least 25 dry days during the month.

Dunedin’s Musselburgh weather station recorded 13mm of rain — 20% of its normal rainfall — and it was the city’s third-lowest March total since records began in 1918.

It was 19% of the town’s usual March total and the fourth-lowest since records began in 1941.

Mr Meyers said the La Nina weather system, which had been sitting over New Zealand since November last year, began its transition to ENSO-neutral during March.

At the same time, the Southern Oscillation Index was neutral and sea surface temperature anomalies increased in the central equatorial Pacific.

It meant March was characterised by a strong mid-month ridge of high pressure across New Zealand and a weaker-than-normal jet stream in the Tasman Sea and Southwest Pacific — all of which contributed to the unusual dryness.

‘‘This was associated with the suppressed phase of the Madden-Julian Oscillation, a climate driver, over the Pacific Ocean.

‘‘Pockets of marine heatwave conditions were observed in the Far North, coastal Canterbury and coastal Southland, extending east of the country.’’

Temperatures in March were above average for large parts of Otago and Southland.

However, Middlemarch recorded the country’s lowest temperature for the month, -1.8degC on March 18.

Apart from that, no temperature records were set in the southern region, he said.

Of the six main centres in March, Auckland was the warmest, Christchurch was the sunniest, Dunedin was the coolest and driest and Hamilton was the wettest and least sunny.