Match hailed success but no word on costs 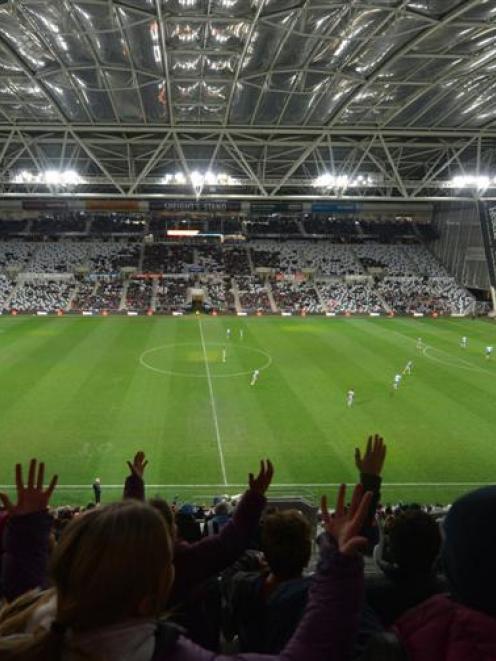 However, Dunedin Venues Management Ltd chief executive Terry Davies is refusing to be drawn on whether the company running the venue covered its costs, after earlier agreeing to underwrite the fixture.

Mr Davies told the Otago Daily Times he was happy with the crowd of 9506 that attended the clash on a bitterly cold Tuesday night.

An initial analysis of ticket sales showed the crowd included a strong contingent from outside the city, with only 58% of tickets sold being bought in Dunedin, he said.

The rest had been bought mainly elsewhere in New Zealand, while overseas fans travelling to Dunedin for the fixture - mainly from the United Kingdom, Australia and Asia - made up 9% of the crowd, he said.

That meant the total number of international fans attending Tuesday night's match was on par with last month's All Blacks versus England test, despite the rugby fixture drawing a crowd three times the size, he said.

He put the international interest down to the ''fanatics'' among the Newcastle United fan base, ''who just follow them anywhere''.

''It's like a religion, isn't it? It surprised us a little bit when we saw that stat.''

The clash also attracted valuable international media exposure for the city and the venue, and the community had benefited from travelling fans' spending and public engagement events, including a skills session staged on Sunday, he said.

However, with the stadium's 2200 members offered free entry to the game, the total crowd figure pointed to a paying attendance of about 7500.

Mr Davies had previously said DVML needed to sell about 9500 tickets to break even, on top of members, after agreeing to pay an underwrite fee to the Wellington Phoenix club, which organised the Football United Tour.

Last night, Mr Davies said the cost of members' free entry had been covered by DVML, which had always been planned, and he was happy with the total crowd size.

However, he would not be drawn on whether DVML covered its costs, saying the exact details were ''commercially sensitive''.

''It was a great event, the hype was great, the publicity was brilliant, everyone was happy, more people flew in from outside and there was more money spent [than expected] ... it was a fantastic result, but I'm not commenting on profit or loss.

''This is about economic impact and the city being seen on a global stage.''