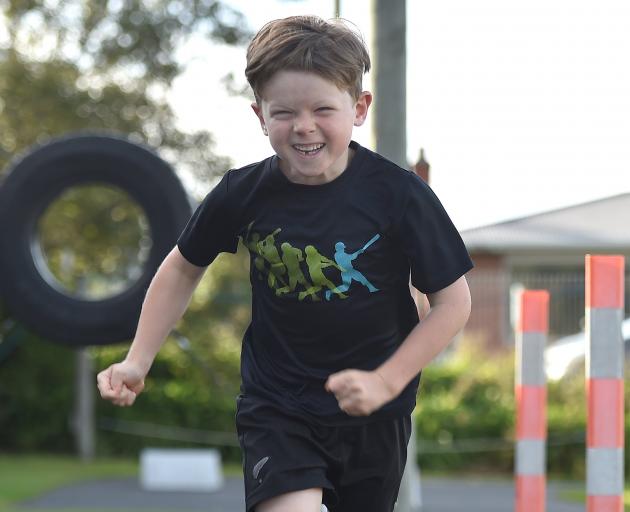 Grant’s Braes School pupil Alex Jakeway is competing in his first Sanitarium Weet-Bix Kids Tryathlon this weekend, despite struggling with a painful chronic glue ear. PHOTO: GREGOR RICHARDSON
Chronic glue ear and two years of no swimming were not enough to stop a determined Grant’s Braes School pupil signing up for the Kids Tryathlon in Dunedin this Sunday.

It had been a dream of Alex Jakeway (7) to take part in the swimming, cycling and running event ever since he started school. This year, his dream would finally come true.

A constant struggle with painful glue ear symptoms had kept him out of the pool, but Alex was recently given the go-ahead by his doctor.

His mum, Narelle Jakeway, said he was very excited and started training hard to overcome the condition, with which he was diagnosed when he was 1.

Training included going to the pool every day in the school holidays to build his confidence.

He had been advised previously against swimming because the water would worsen his symptoms, which had affected his hearing and speech and resulted in many painful infections.

Alex had had eight ear infections in the past winter alone.

"He would just get over one and then get another one," Mrs Jakeway said.

They helped improve his hearing over time, but did not stay in place for long because of the damage in his inner ear drum.

She said he often had to wear beanies at school because fluid would leak out of his ears.

Despite all of that, Alex’s main concerns were about the bike ride part of the Tryathlon.

"Biking is going to be hard ... my bike is on gear two so it is easier for me to ride on grass now."

He said his swimming had been getting better because his ears were not hurting as much as they used to.

Alex said he wanted to be able to swim a lot and hoped his condition would continue to get better with time.

About 1500 children are expected to take part in the Tryathlon event, which starts at 9am in Memorial Park in Mosgiel.