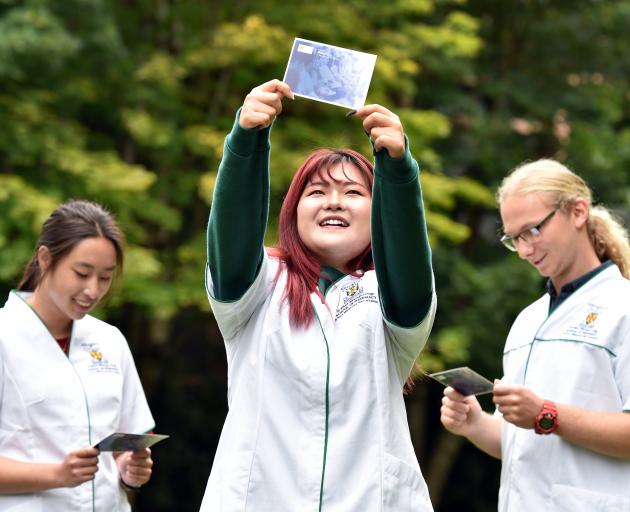 University of Otago pharmacy student Angela Fan (19, centre) holds up a message card, while fellow students Manyi Ma (18) and James Schonknecht (21) do the same, after a white coat ceremony at the weekend.
Imagine you have just slipped on a white coat and later find a message in a pocket, giving you positive advice for the future.

Angela Fan had exactly that experience at the University of Otago campus on Saturday when she was one of 131 first year pharmacy students to attend the traditional white coat ceremony.

The event, at 10am on Saturday, at the university Link, was special in itself for students, but the message in the pocket was particularly memorable, event organisers said.

The messages were all from Otago pharmacy graduates, from as far away as Australia, Asia and the United Kingdom, who had taken the time to write them, pharmacy organisers said.

"It’s quite a special gift,’’ Miss Fan said after the two-hour event.

"I feel it’s given me more confidence to go through my professional course," she said. 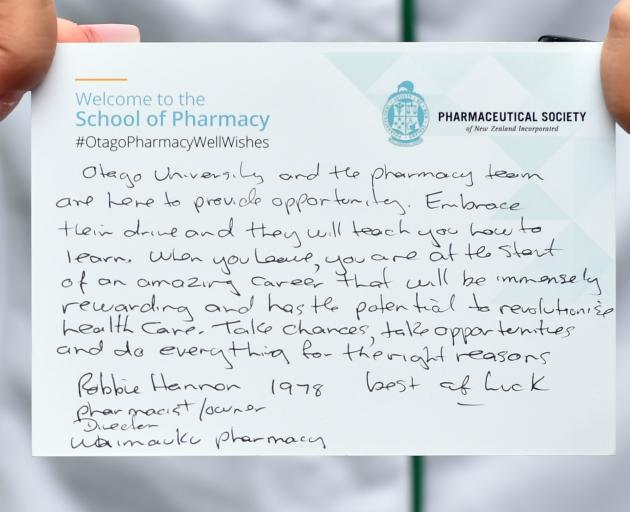 One of the messages sent by Otago pharmacy graduates. PHOTO: PETER MCINTOSH
"It’s quite special — probably the start of pharmacy for me," she said.

The ceremony and the message had helped clarify her thinking about her path ahead in this professional course, she said.

Miss Fan, who was born in China but is a New Zealand resident, completed her Otago first year health sciences studies last year, and this year begins the first of three years of specialised pharmacy study.

Otago Pharmacy School dean Prof Carlo Marra said that giving the students their white coats, with the messages in the pockets, conveyed the sense that they were now entering a much wider profession.

And that profession included mentors, such as the pharmacy graduate message writers, to provide support, he said.

"Embrace their drive and they will teach you how to learn,’’ Mr Hannon added in his message card.

"When you leave, you are at the start of an amazing career that will be immensely rewarding and has the potential to revolutionise health care."

Fellow pharmacy students Manyi Ma and James Schonknecht said they also had enjoyed the white coat ceremony and were impressed by their own messages.