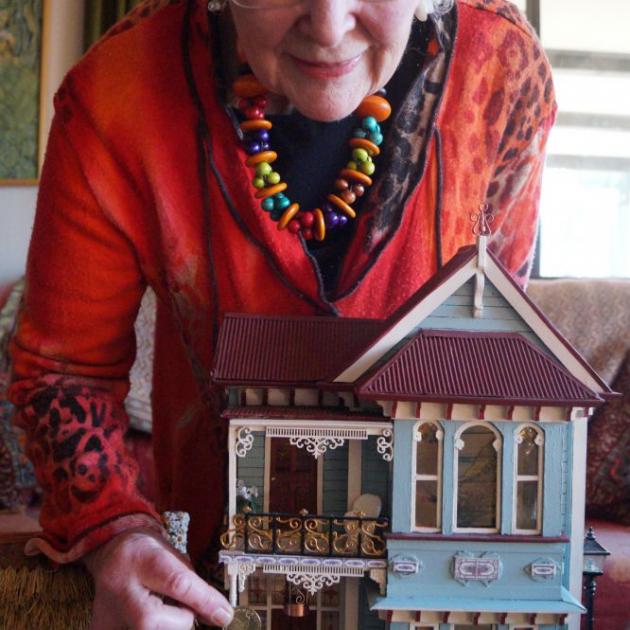 Miniature creator and collector Margaret Lindsay holds a $2 coin for scale against her model of 178 Queen St. PHOTOS: GRETA YEOMAN

Travelling the world inspired one Dunedin resident so much she re-created her journeys in miniature. Margaret Lindsay has seen plenty of the world in her 78 years and collected plenty of miniature souvenirs.

''It's just like collecting a souvenir and showing it off,'' she said.

The Roslyn-based miniature enthusiast began making miniatures in the 1980s after returning to New Zealand after 15 years in Southeast Asia.

''We had to make so many things ourselves and we still do.''

Her favourite thing was embroidery and using tools, having learned to embroider when living in Indonesia, she said.

''I was living in a jungle area and I was only learning the language so I had no-one to talk to really, so I got an embroidery book from Singapore and started teaching myself embroidery.''

She said she created an average of two projects a year, although her recent Tudor creation had taken a long time because of the fine embroidery.

She said dolls' houses and miniatures originated after girls being trained as servants were taught using the scale models of their masters' houses. Her next project would be creating a theatre, which would feature curtains made from material she brought back from Iran.

''If you're looking for miniatures it's easy to bring them back.''

Mrs Lindsay would also hunt for items when wandering around the city, which had embarrassed her son at one point after she picked up items off the ground.

Her creations from second-hand items included re-using plastic drink container tops as domes on buildings, picture frames as the front of displays and ice-cream sticks as window frames.

Some of Mrs Lindsay's creations will be on display at The Dollshouse and Miniaturists Exhibition on Saturday, from 10am-4pm at St Peter's Church in Hillside Rd. Adults $5, children free.