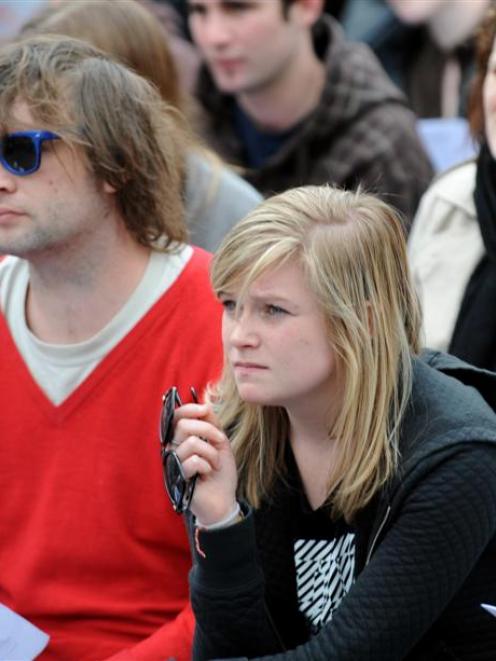 That resolution defeated, meeting chairman Parbal Mishra ruled a subsequent motion - that the OUSA invalidate her disqualification and appoint a new arbitrator to rehear an appeal over whether she broke election rules during her campaign - should be withdrawn.

It was clear the 270 people at the meeting did not support her attempts to have her appeal reheard, Miss Moore said later.

"But I don't think the meeting was representative of the student body. I've still got people approaching me saying what happened to me was unfair."

Her brother, Rob Moore, a Wellington law student who flew to Dunedin to attend the meeting with her, said they and their father, a lawyer, would decide over the next few days whether to continue the challenge.

The OUSA executive has said it does not believe it has the power to overturn the abitrator's decision, so Miss Moore's only option would appear to be seeking a court injunction.

Yesterday's student meeting was the third this year.

The OUSA is required to hold at least two student meetings annually but scheduled a third after students drifted away from the second meeting and attendance dropped below the quorum of 198.

There were fears students would do the same yesterday, with 25 motions on the agenda instead of the usual three to five, but those fears proved unfounded.

Almost all the students gathered stayed a full two hours and participated enthusiastically in what was a generally good-natured meeting.

Many of the motions dealt with OUSA's relationship with the cannabis reform group Norml, which has been holding twice-weekly "smoke-ups" on campus this year to protest New Zealand's cannabis prohibition laws.

In the main, the students supported the status quo, rejecting motions including appointing a cannabis law reform representative to the OUSA executive and demanding the university proctor and Campus Watch refrain from intervening in smoke-up protests.

However, the meeting also rejected another motion calling for current OUSA policy supporting students' right to smoke cannabis on campus as a protest to be rescinded.

Norml spokesman Abe Gray, whose stance on cannabis reform and the smoke-up protests has polarised students this year, was the subject of two motions.

However, Mr Mishra ruled out of order a motion that Mr Gray's status "be upgraded from irritating to annoying", while the meeting voted against a motion that OUSA allocate funds and buy Mr Gray an oversized novelty hat to be worn by him at all times on campus.

Student Worik Stanton berated the proposers of that motion as "silly and childish".

Students should be standing up for those "brave and courageous enough" to protest, he said, rather than resorting to unnecessary personal attacks.

After the meeting, OUSA president Simon Wilson said he was pleased with the turnout and the way business was conducted.