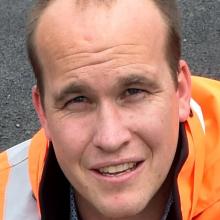 Tom Dyer
A flood of complaints immediately following the introduction of Dunedin city water to Mosgiel’s  water supply last year has slowed to a trickle.

About 40 official complaints were made to the Dunedin City Council in the month after it controversially switched  Mosgiel’s water supply from the old bore water system to the city supply via the Mt Grand treatment plant because of safety concerns.

But since February, a total of three complaints have been made and only one of those  related to the Mosgiel supply.

Council 3 Waters Group manager Tom Dyer said he expected the chlorine  taste and smell of the water to have largely dissipated since the supply was switched.

As part of its routine work,  the council tested Mosgiel’s water supply at nine different sites in the town three times a week, Mr Dyer said.

All the testing in Mosgiel presented results between 0.2 and 1.0 grams of chlorine  per cubic metre,

above the lowest level allowed by the New Zealand drinking water standards and below what is considered acceptable for tap water, he said.

If people complained about the smell or taste of the water, council staff would visit and do a site test to determine if there were any issues. In Christchurch, the city council is reducing the amount of chlorine added to the city’s water supply after hundreds of complaints, but the water was dosed differently in Dunedin, Mr Dyer said.

In Christchurch, chlorine was added directly to the water pipes while in Dunedin it was mixed in a tank at the reservoir before flowing into the system. But some Mosgiel residents are still not happy about having chlorine in their water. Two residents who did not want to be named contacted the Otago Daily Times claiming  members of their family developed bad eczema after bathing and showering, which they put down to  added chlorine.

If the chlorine was not removed from the supply, they wanted the council to offer an alternative or lower the amount used. In May, Mr Dyer updated  the Mosgiel Taieri Community Board  on the feasibility of returning the town to treated bore water. As the water would still need to be chlorinated, a  treatment plant would have to be built,  costing up to $16million. The council had no plans to do so at this stage, he said.

It's always people that don't want to be named that make ludicrous claims.
Is that so no doctor/medical evidence is found that there was no person in the family actually afflicted with anything?
Or that the cause had been proven to not be chlorine related?

Just because we've given up on complaining doesn't mean we're happy, or that the taste is acceptable. Just have to accept that because we're terrible custodians of the planet we can't use what is natural any more and we can solve it by creating more chemicals and throwing them at the problem.