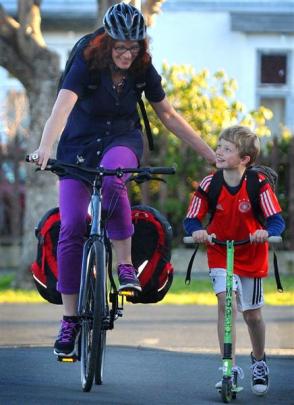 Heike Cebulla-Elder and her son Liam (8) in South Dunedin. Photo by Christine O'Connor.

If Liam has his way, he takes his scooter, but they do bike often, Ms Cebulla-Elder laughs.

''For me, it's really important for the environment, to have less exhaust, to use the car less and use less petrol, and contribute to less climate change.''

Ms Cebulla-Elder moved to Dunedin from Europe 15 years ago, and is a member of cycle lobby group Spokes Dunedin.

She teaches at Queen's High School, and Liam is a pupil at St Clair School, a few blocks away.

Ms Cebulla-Elder likes the cycleways. ''There are really positive things [about them],'' she says.

When she and her son bike to school, they often take the cycleways.

But she has a list of potential improvements to the cycle network, which she rattles off promptly.

''[you could] say: How can we accommodate parking and a cycle lane?''

''Another example, where Liam and I bike every day, where you come back via Countdown, and try to get on Portobello Rd, crossing is really tricky, so you stay on the footpath.''

Perhaps the cycle lane on Andersons Bay Rd could be improved and extended, and crossing Portsmouth Dr could be made easier for cyclists, she says.

Still things have improved over the 15 years Ms Cebulla-Elder has lived in Dunedin.

''There are more cyclists on the road now, hence, you feel safer because you see others. And cars are exposed to more cyclists as well.''

Some schools in South Dunedin area are reporting an increase in pupils cycling to school over the past few years, including Musselburgh and Tahuna Normal Intermediate.

The Dunedin City Council says pupils cycling to the Tahuna school have risen from 14% in 2011 to 20% this year.

''But logic would say the cycleways would have a positive effect.''

At St Clair, though, the tide is moving in a different direction, principal Richard Newton says.

More children are scootering, and fewer are cycling, than compared with 10 years ago, he says.

''Parent comments over the years suggest that parents like the fact that scooters are on the footpath [away from cars], move more slowly, and are closer to the ground.''