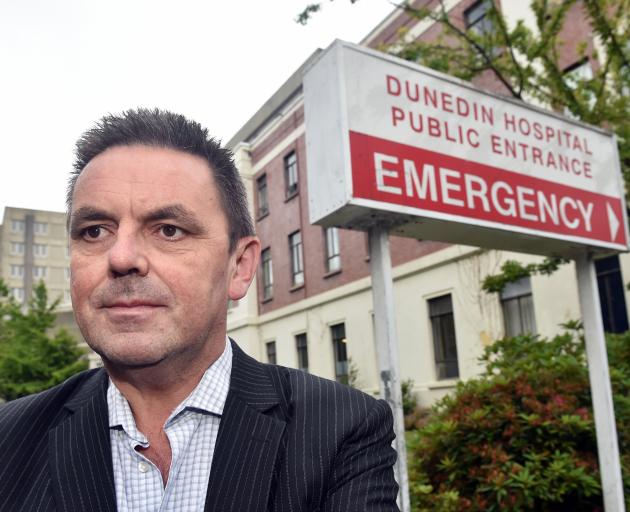 Southern DHB chief executive Chris Fleming. Photo: ODT files
The Southern District Health Board should accept the majority of recommendations made in a scathing independent report into how it operates, its chief executive says.

Earlier this year, Chris Fleming and the Ministry of Health commissioned Hamilton-based consultant Leena Singh to assess how the SDHB was functioning.

Her draft report, which was supplied to the Otago Daily Times, pulled no punches as it depicted an organisation which lurched from crisis to crisis and needed to rethink its management and governance structure.

"In reading the report there are statements which we do not necessarily agree with, but there are many themes contained in the report which indeed ring true," Mr Fleming said in a report to be considered by the board tomorrow.

"Rather than litigating detail in the report it is our view that we should pick up on the recommendations, consider them and then take action to implement those recommendations."

Mr Fleming said the majority of Ms Singh’s 30 recommendations had merit, and he had already assigned members of the SDHB’s executive team to work on some of those.

He had also invited Ms Singh to work directly with his executives to implement one of her key recommendations, introduction of a performance and accountability framework.

Ms Singh’s report said the lack of such a framework meant that when changes needed to be made sometimes the responsibility to do that work ended up with the wrong manager.

"At the SDHB there is a notable reaction to variation, with lots of senior resources involved and decisions made from different parts of the management team without fully understanding the implications of the decision, resulting in short-term ‘fixes’ that create a chain reaction of crisis the following weeks/months.

"Implementing an accountability and performance framework within the DHB will draw the key risks of the organisation out early and allow for adequate planning to mitigate the identified risk."

Mr Fleming said he regarded the other key issues to pursue from the Singh report to be realigning the responsibilities of the executive team, improving relations with clinical staff and ensuring resources were better used by the SDHB to ensure better clinical practice, operational efficiencies and financial payback.

The SDHB recorded a $5.2million deficit for the month of June, which meant its provisional year end result was a $28.4 million deficit, against a planned deficit of $10.9million.

Need another management team who actually know how to run a hospital......

It will be buried in soft earth and platitudes. Nobody will really be at fault. When I was younger this was cynicism, now it is experience.

How many more reports do we need, how many more failures to deliver basic services do we need. How many more apologies for medical misadventure do we need to hear. How many times do we need to hear the SDHB has blown its budget again. There have been changes in governance, commissioners, board chairs, board members, to no good effect. Someone needs to seriously look at the executive. Does anyone understand the term 'accountability'? Start at the top, the CE has presided over all these failures. As an accountant, you'd expect he could at least balance to books, but no. People are dying and being incapacitated because of executive failures. It is time to pay the piper, Chris.

I think the top includes above the local governance levels as well. If the "funding model" is inadequate then no amount of juggling, understaffing, truncating of waiting lists is ever going to bring the books to balance. Start at the very top and work down and that is the government and Ministry of Health. This "funding model" is not a god - it is a model that you and I don't seem to be able to see and plug figures into, and it seems to be a failure in modelling the actual need of the Southern region. That aside, the local governance perpetually seems to fail and misrepresent situations.

I worked for the SRHB as a nurse for over 40 years and found that since they stopped Matrons and Head Nurses managing, the SRHB has gone steadily down hill, You cannot manage a hospital without extensive knowledge of its workings. Hospitals rely on Nurses, Doctors and technical staff. Plonking in so called managers who can only crunch numbers and have NO contact with their staff apart from attending farewells and afternoon teas will always result in disaster. The payouts made to these managers when they fail would have paid for several more hands on staff.