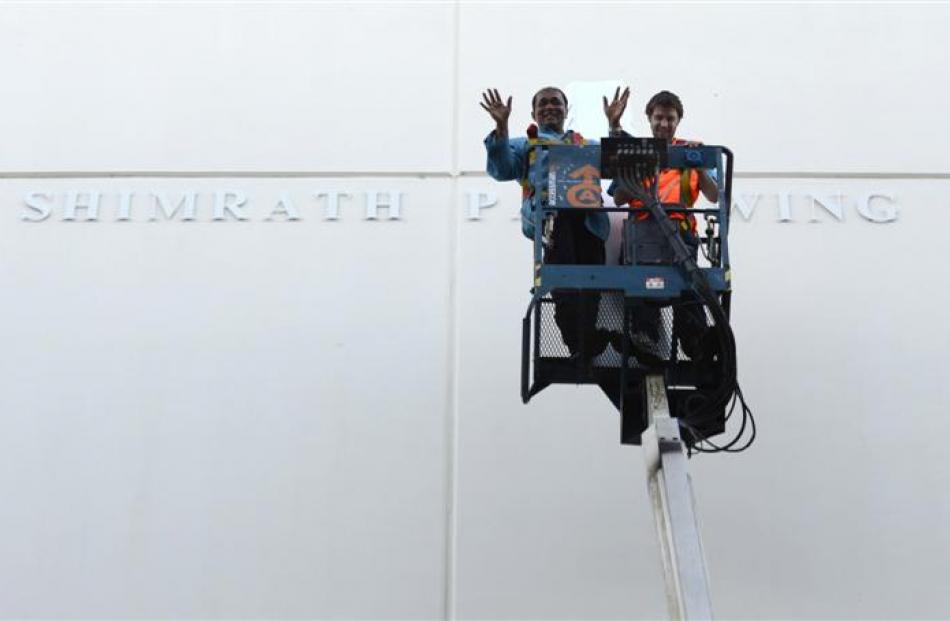 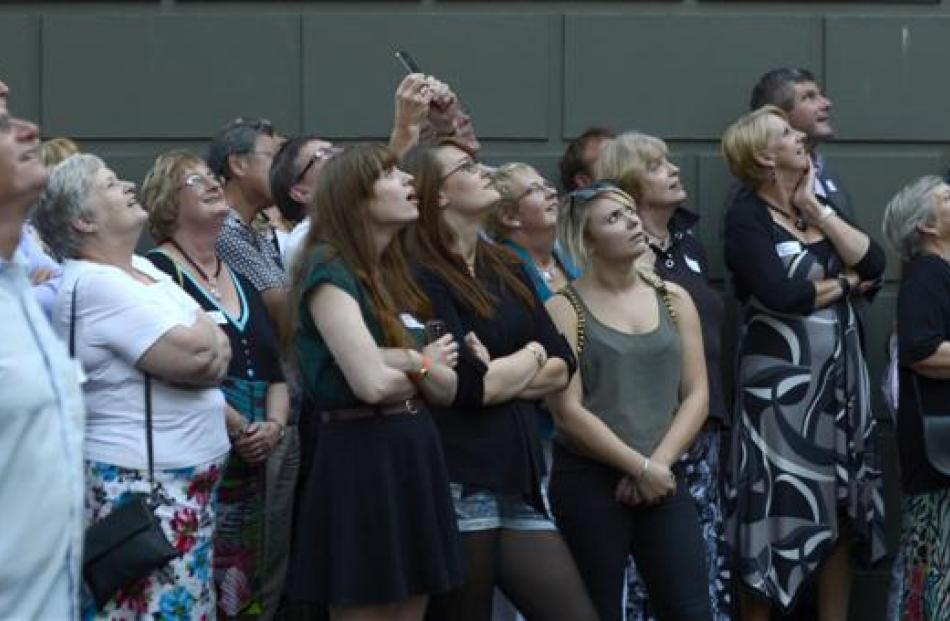 Onlookers gasp as the pair descend from a position 17m up the side of the building.

Long-serving former Otago Museum chief executive Shimrath Paul has been granted a rare honour- having a wing at the museum named after him.

After a nearly three-hour-long farewell function at the museum last night, Mr Paul was surprised to be invited outside to the museum staff car park, shortly before 9pm.

There he climbed into a cherry picker and was hoisted 17m up the side of a wing of the museum complex, which had been built as part of stage two of the museum's redevelopment, completed under his leadership in the year 2000.

He then removed masking materials to reveal the name ''Shimrath Paul Wing''.

''Thank you from the bottom of my heart,'' he told Otago Museum Trust Board chairman Graham Crombie and more than 100 dignitaries, well-wishers and museum staff, after climbing down from the cherry picker.

He had told onlookers, as he soared up the side of the building, he was no lover of heights.

During an earlier farewell speech he said he had greatly enjoyed his time at the museum and thanked all those ''fantastic people'' who had helped him ''make a difference for our community''.

Mr Paul joined the museum in 1990 as project manager for the museum's new Discovery World science centre, and left as the museum's chief executive in September last year, to take up a senior medical centre management post in Jakarta, Indonesia.

The significance of Mr Paul's more than 20-year contribution to the museum was underscored by praise last night from many people, including Mr Crombie, Dunedin Mayor Dave Cull and former mayor Peter Chin.

Mr Cull said Mr Paul had ''lived and breathed'' the museum, and thanked him for his major achievements and the way his ''personal touch'' had helped build many beneficial relationships, including in Shanghai, Dunedin's Chinese Sister City.

The significance of Mr Paul's contribution was also underscored by the presence of several leading dignitaries, including Prof Chen Kelun, a respected senior figure at the Shanghai Museum, and June, Lady Hillary. Lady Hillary played a leading role in the donation of Hillary collection items to the museum in 2010, including mountaineering artefacts once owned by the late Sir Edmund Hillary, the first man to climb Mount Everest.