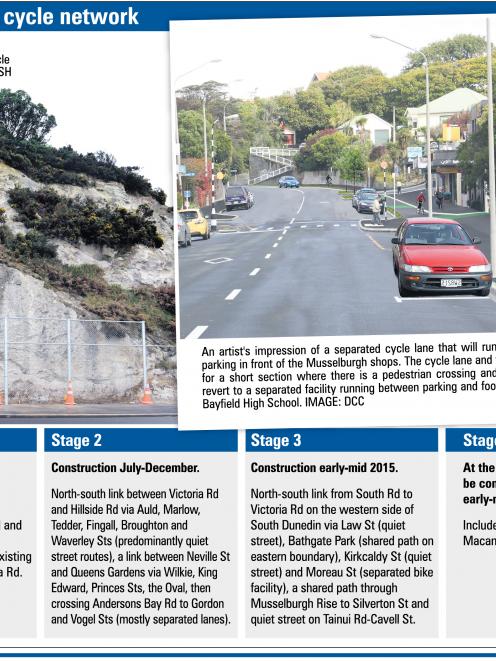 Image by ODT Graphics.
A separated cycle lane is to be installed on the north side of Musselburgh Rise through the Musselburgh shopping area, as part of the South Dunedin cycle network.

The final design of the lane was decided last week, following consultation with affected property owners. The lane will be installed as part of the third construction stage of the cycle network, in early to mid-2015.

The network is well under way. Construction of the $1.5 million first stage, including a separated cycle lane in Portobello Rd, is expected to be completed by May.

Construction crews will then move on to the $1 million second stage, which includes a separated cycle lane in Richardson and Coughtrey Sts.

That stage is expected to be completed by the end of the year, before work on the third stage begins and work continues into early 2015.

Consultation on the fourth stage, which includes lanes on main routes such as Forbury, Macandrew and Victoria Rds, is expected to begin after Easter.

The whole network - which is to cost about $4.5 million, with the New Zealand Transport Agency covering $3 million of that cost and the Dunedin City Council paying $1.5 million - is expected to be in place by July next year.

Because the council was installing the cycling network on to existing infrastructure, the project had required a great deal of consultation with those affected, council project manager Lisa Clifford said.

A general concept plan was prepared and since then the council had consulted directly with those affected by each proposed cycle route as it worked through the network.

Letters had been sent to property owners and dropped to houses in some cases, as the council considered each route in detail.

More drop-in sessions had been held, as well as communication by email and phone and visits to some individuals. The consultation had led to some changes to routes as the project progressed.

Thousands of people had been contacted in the process, she said.

The feedback had been mixed. There had been some negative comments, mainly around the loss of parking - some parks will be lost at points where crossings are to be installed, roads are too narrow, or paving is to be built out (separated cycle lanes will not generally result in car park losses) - but also much positive feedback.

''It's something new, it's change and change is hard for everybody. With all of these plans, we have been particularly conscious of the parking situation,'' Ms Clifford said.

A contractor was constructing a fence in Shore St to prevent rocks rolling on to the lane, and some tidy-up work was being completed. Trees would soon be planted in Portobello Rd, along the median strip between the cycle lane and road. Markings and signs would soon follow.

Markings had been painted on the road to stop any confusion about which lane was for which direction.

He was aware people had been having concerns about vehicle congestion since the cycle lane went in, but the intention was partly to calm the traffic. Drivers would have to find other routes if they were concerned, he said.

''This is about providing the space for every road user to use the road.

Counters had been installed in several spots to monitor use of the shared paths and cycle lanes before and after the work.