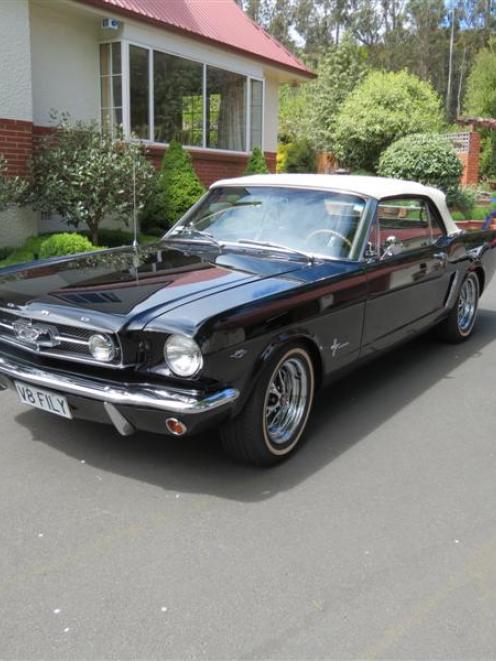 Phil Thomson, of Mosgiel, has fully restored this 1965 Ford Mustang convertible, which he bought during a road trip of the United States of America in 2000. When Mr Thomson sent the Mustang to the panelbeaters in 2006, they found it had major problems with rust. Photo by David Beck.
Mosgiel man Phil Thomson went on a road trip in California in 2000 and came back to New Zealand with a 1965 Ford Mustang Convertible.

''Originally, my mate bought it but by the end of the trip we'd done a deal and I'd bought it from him. I did some of the mechanical work to get it going and we used it for awhile - it was in pretty average condition,'' Mr Thomson said.

He never liked the colour it had been painted - white with a tan roof - and knew there was an issue with rust in a back guard, so in 2006, he got to work fully restoring the vehicle.

''Before I knew, I had it fully dismantled. I sent it to the panel beaters who found it was a mess - it had more holes that a slice of swiss cheese. There was rust everywhere.

''I could either throw it away or fix it - we decided to fix it. Rob Douglas [of Dunedin] did the panel beating. He did a fantastic job,'' he said.

Mr Thomson then had the car painted black which was close to its original colour.

''Apart from the upholstery, I pretty much did the rest myself. I freshened up the engine and put in a new transmission, suspension, brakes, steering. A lot of it was new parts.

''I got some in New Zealand and a lot of the body panels came from the States. There's a couple of good suppliers of Mustang parts in New Zealand, so I try to support them.''

He had owned Triumph vehicles in the past and when he went to the United States of America he had been thinking about buying a Triumph TR6.

''The two-seater car didn't make a lot of sense. I had young kids at the time so the four-seater Mustang was more suitable. Other than that, I had just always liked Ford Mustangs. It's a really nice car to drive, it drives really well and I'm very pleased with it.''