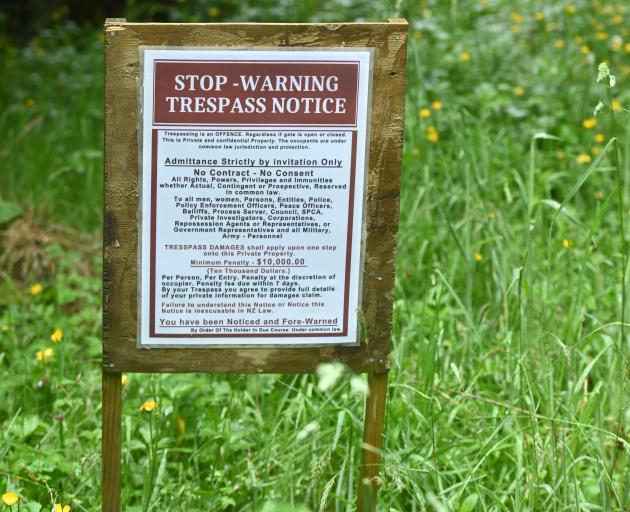 This mystery sign is to be removed after the owner of the land it was erected on was surprised to learn it was there. PHOTO: LINDA ROBERTSON
The owner of a piece of land through which part of Dunedin’s Three Peaks mountain race route goes and where a sign threatening to prosecute trespassers appeared recently, upsetting race organisers, says he is perfectly happy for people to use the track.

The sign, which threatens trespassers with $10,000 fines, appeared on an access road leading from Leith Valley Rd to a Dunedin City Council-maintained water supply.

The access road crosses the southwest corner of a piece of land owned by Rimu Downs Ltd.

Rimu Downs’ sole director Alan Winsloe, who was unable to be contacted prior to a story running about the sign, contacted the Otago Daily Times from Australia this morning to say he did not put the sign up, and did not know who did.

He was happy for people to use the route through his property, which was a link between Swampy Ridge track and Morrisons Burn track through to the start of the climb up Mt Cargill.

He had asked a neighbour to take the sign down immediately, Mr Winsloe said.

Leith Harrier and Athletic Club president Dr Chris Sole said the route was a key part of the course for the Three Peaks race which is to be held on March 27 next year.

If the club was not able to get permission from the landowner to use the road, finding an alternative route would be difficult.

The club thought the piece of road to be a public access way for decades, before the sign appeared within the last month.

The sign was only posted at the Leith Valley Rd end of the access road, which meant runners using the path to return to the road from Swampy Peak would only encounter it after they had used the road.

Dr Sole said he did not know what had prompted the erection of the sign.

The sign said the road was ‘‘private and confidential property’’ and admittance was by invitation only.

It threatened a trespass penalty of $10,000 per person, per entry.