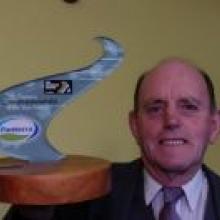 Mr Harvey (77), of Mosgiel, received the inaugural award from Fonterra and the Keep New Zealand Beautiful Society at a recent ceremony at the Beehive.

His efforts in cleaning up a railway embankment stretching 5.5km from Riccarton Rd to Wingatui resulted in Mr Harvey being chosen from many other volunteers involved in the society's 50 regional programmes, award officials said.

He also received a cheque for $5000, on behalf of the Mosgiel Rail Corridor Trust.

Mr Harvey has chaired the trust and co-ordinated its work programme since it was established in 2000, with close links to Keep Dunedin Beautiful and the Mosgiel-Taieri Community Board.

Fonterra environmental manager Adrian Pyne, of Hamilton, said that dedicated volunteers such as Mr Harvey ‘‘play a vital role in making our communities cleaner and safer places to live and work''.

For the past 12 years, Mr Harvey has worked more than 25 hours a week on the project.

More than 280cu m of soil have been deposited to level the ground and more than 6000 decorative plants and trees, the latter including natives and flowering cherries, have been planted.

This has transformed the appearance of a previously unkempt-looking area beside a main tourist bus route and Wingatui station, the latter used by overseas railway visitors.

Mr Harvey was ‘‘greatly humbled'' by the award and reflected on when fellow Mosgiel resident Brian Miller and he had started the clean-up project in 1996.

Much had since been achieved, thanks to extensive support from many people and organisations, including Work and Income community workers, community probation service workers, service clubs, residents, the trust, Ontrack, the Dunedin City Council and the community board, he said.

He hoped the award would encourage the city council to include the area in its annual maintenance programme.