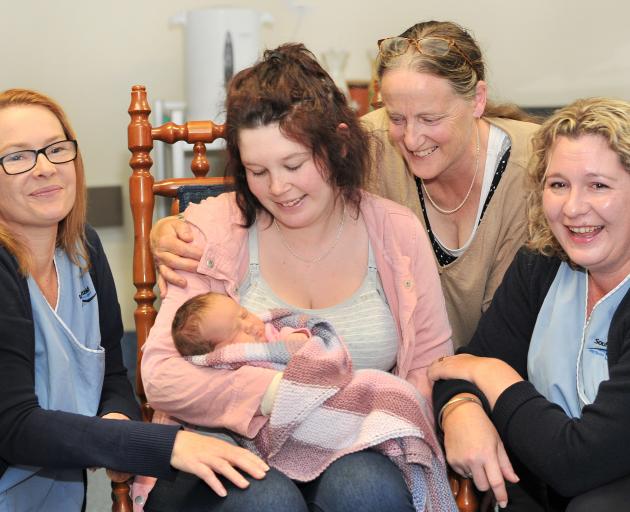 A chronic nationwide shortage of midwives has hit Dunedin heavily, and an estimated three-quarters of local lead maternity care (LMC) midwives employed in 2014 are no longer working in the city.

In June it emerged that no LMC midwives in Dunedin were accepting new clients for December and January, the members of a dwindling workforce having all opted to take holidays at that time or being otherwise unavailable.

Yesterday, Queen Mary officially launched a new service where two midwives are employed to visit mothers who have been unable to book a midwife.

The seven-day-a-week, 8am-4.30pm service would provide antenatal and postnatal care and had about 70 women on its books, Southern District Health Board acting director of midwifery Heather LaDell said.

"We recognised there was a need and we have tried to fill it, not just in a one-off situation but to meet an ongoing need.

"In the past Dunedin has been blessed with a large supply of midwives, and we are now down to about 20-25% of our usual supply of LMC midwives. This is happening all over the country ... but we have not had to face this kind of shortage for a very long time."

The service would be led by midwives Deborah Palmer and Fiona Mair, supported by their Queen Mary colleagues. Labour and birth care would still be provided by core Queen Mary midwives, Ms LaDell said.

"If we could conjure up more trained LMCs that would have been our preference because that is gold standard care.

"The pay and conditions of those midwives is not set by the DHBs, so that is not a problem that we could wave a magic wand and solve. We can provide a safe service and hopefully meet the needs of the community."

College of Midwives chief executive Alison Eddy said Dunedin was a good example of DHBs having to enact stopgap measures to address the nationwide midwife shortage.

While better than nothing, the type of care the Queen Mary programme might be able to provide would not necessarily meet the requirements of high-needs patients, Ms Eddy said.

The College of Midwives was still negotiating with the Ministry of Health for a new national contract for midwives.

Ms Eddy said it was hoped a deal could be done by mid next year, but in the interim the morale of the workforce continued to fall and more were leaving the profession.