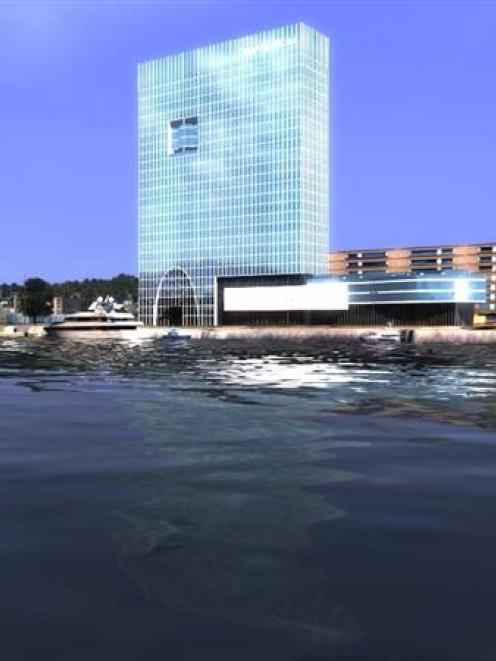 An artist's impression of a new hotel proposed to be built near Steamer basin, Dunedin. Image supplied.
The $100 million hotel planned for Dunedin's waterfront could be joined by other new buildings if the Dunedin City Council gives the go-ahead to the controversial tower, a property owner believes.

The claim from Tim Barnett - the man who sold the Wharf St site to the hotel developers - was among more than 400 public submissions on the hotel received by yesterday's deadline.

By late yesterday afternoon, council staff had processed 398 of them, counting 355 opposed, 37 in support and six neutral.

However, more submissions were still coming in and a final tally would not be known until early next week, council resource consents manager Alan Worthington said.

The overwhelming majority of those opposed to the hotel worried about its height, shading and other effects, as well as the damage they said it would do to the city's heritage status.

However, Mr Barnett, the director of Arthur Barnett Properties Ltd, argued the hotel would breathe new life into the central city, prevent urban sprawl and encourage development in surrounding areas.

The benefits would "substantially outweigh" any problems, and concerns about the height of the hotel would ease when it was joined by other new buildings, he believed.

The council's harbourside plan change had paved the way for Dunedin to follow in the footsteps of other cities around the globe, by focusing city development along the waterfront, he believed.

"This bold step forward is a first major step in the development of Dunedin by the private sector for over a decade.

"This consent proposal will provide the confidence for other adjoining landowners and developers to construct or to retrofit complementary developments ... and to make Dunedin a better place."

It would also damage the city's heritage image and deliver a blow to the tourist industry.

He claimed the council could even face a lawsuit if it granted consent for the hotel, because of the design's apparent similarity to that of the United Nations Secretariat building.

The hotel plan included 164 apartments, which, if built, would mean less incentive to refurbish the warehouse buildings for new uses, he believed.

Kaan's Catering Supplies managing director Lindsay Kaan said the hotel would be bad for nearby waterfront businesses, including his own, as it would increase traffic congestion in the already busy area.

Dunedin Mayor Dave Cull, in a statement, acknowledged the "extraordinary interest" in the hotel proposal, but said it was not appropriate to comment on it - or the submissions - at this stage of the process.

A Dunedin City Council hearings committee would decide whether to grant consent for the hotel, with a hearing scheduled to begin in early December and take at least four days.