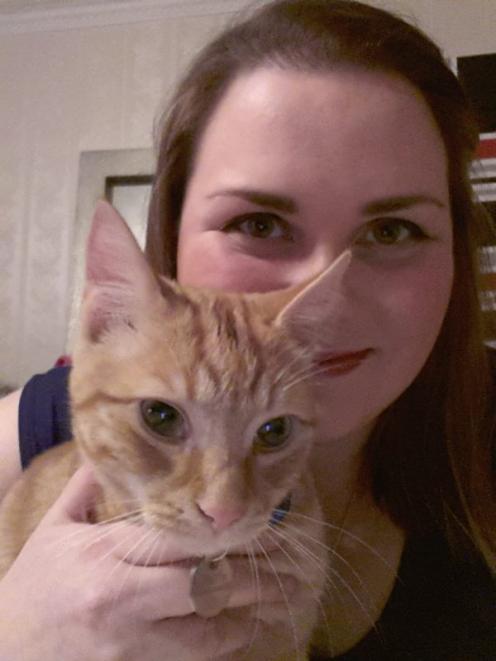 Pawshake pet-sitter Anna Tarbotton holds Jaffa the cat. She signed up to the new app, which allows users to find pet-sitters in their area, recently. Supplied photo
Dunedinites are increasingly going online to search for babysitters for their furry friends and a new app which aids the process is starting to take off.

Dubbed Pawshake, the app allows users to search for and contact pet-sitters in their community. Pawshake was started in Belgium in 2013 and launched in New Zealand in July.

One of the Pawshake pet-sitters is Dunedin animal-lover Anna Tarbotton. She found out about Pawshake through Facebook about a month ago.

''I'm definitely an animal-lover so thought it would be a good way to be around more animals without adopting more and turning into a crazy cat lady,'' she said.

''I think I love animals because I am a fairly protective and loving person. I really just like ...  hrowing a ball repetitively or scratching behind some ears, as long as the animal is enjoying it.''

When she signed up, there were only three other Dunedin pet-sitters on Pawshake. Now there are about seven and one person from Mosgiel.

Pawshake was founder by Belgian internet entrepreneurs Dries Coucke and Tanguy Peers. Mr Coucke had the idea for the app in 2010 when he was trying to find someone to care for his father's labrador Ibeau, while his father was being treated for lung cancer.

He posted his need for a pet-sitter on Facebook and the enthusiasm of the responses he received gave him the idea for Pawshake. Mr Coucke spoke to his former colleague Mr Peers about the idea and they launched the company in 2013.

Soon afterwards, they made the decision to bring Pawshake to New Zealand and says there are already hundreds of Kiwis using the app.

''The combination of high e-commerce adoption, care for wellbeing for pets, and large pet population made New Zealand an obvious market for Pawshake,'' Mr Coucke said.

A survey published by the New Zealand Companion Animal Council showed 68% of New Zealand households owned at least one pet, a higher percentage than in any comparable country, he said.