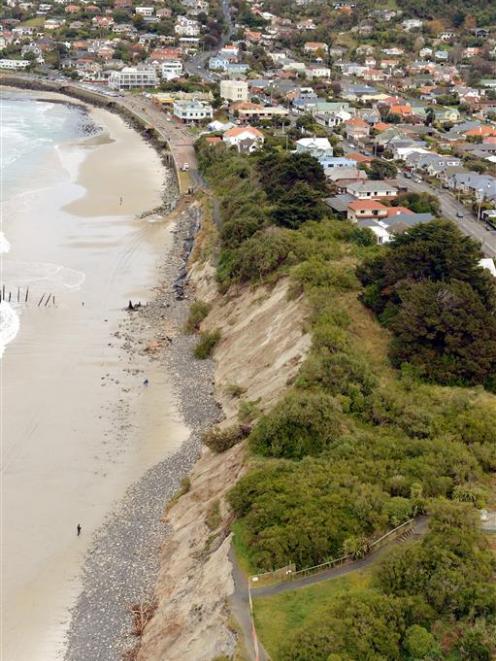 Erosion at St Clair and Middle beachPHOTO: STEPHEN JAQUIERY
The sea's constant battering of Dunedin's Ocean Beach could erode another $100,000 from city coffers in the coming year.

Erosion has been an issue along the coastal stretch since the first seawalls were built and the dunes altered in the 19th century.

In response, an in-depth engineering report on the issue was completed by consultants Tonkin and Taylor in 2011.

It recommended the continuation of a holding pattern for 10 years, followed by either managed retreat from the area or construction over 10 to 50 years of a buried backstop wall.

Those investigations would include ‘‘estimated capital and ongoing operational costs, into options for the management of Ocean Beach erosion over the medium term''.

Medium term was defined as being between 10 and 50 years.

However, while in 2011 a decision was made to take a ‘‘hold the line option'', that was no longer appropriate following major erosion during last year's autumn and winter storms.

‘‘I think from our position there's been a lot happen [since the 2011 report]. And there's a general consensus now that options need to be investigated.''

Those investigations would not include ‘‘detailed designs'' of future anti-erosion measures - that work would come later.

‘‘What we're doing is saying that it's been five years nearly and now we're at a stage where we want to progress with a plan to present to council.''

‘‘But five years is a long time in a coastal environment. We need to do everything we can to make sure the [future] decision is on the most up to date options available.''

The need for a new investigation did not mean the 2011 report was a waste of money as that report provided ‘‘a huge amount of information'' which would be recycled, he said.

The investigation would be carried out by ‘‘an external party'' yet to be decided.