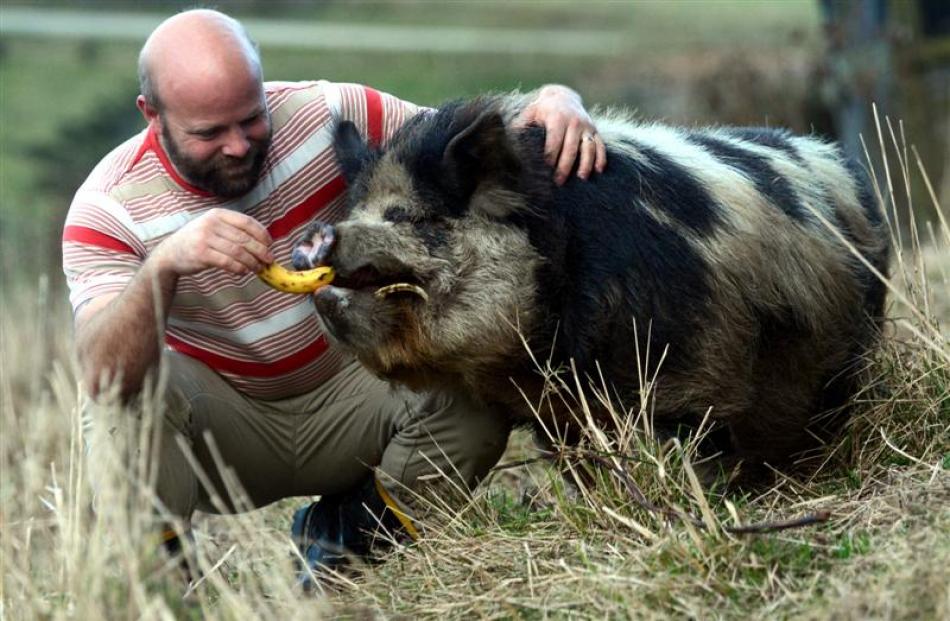 Boris the pig relaxes with his owner, Cam Romeril, in Dunedin yesterday after being pulled off a woman in a car on Sunday. Photo by Peter McIntosh.

A Dunedin woman whose close encounter with a pig left her nursing bruises says she holds no grudge against the ''smelly'' swine.

The owner of the 150kg kunekune called Boris says the pig was simply seeking affection.

The woman, who did not wish to be named, said several of the stories circulating in the media yesterday about the attack on her by a pig on Purakaunui Rd on Sunday were a bit curly, so she set the record straight with the Otago Daily Times yesterday.

She had been sorting books for the upcoming Regent Book Sale in Dunedin and was driving to her Purakaunui Rd home.

About 300m from her driveway, at Mihiwaka, she stopped after seeing a large pig chasing traffic.

She got out of her car to open a nearby farm gate, but as she struggled with the latch, the pig nibbled on her trousers, so she retreated to her car.

The pig began chewing on the hood of her jersey, which was draped around her neck.

A man drove past as the pig climbed on to her.

''The next person who drove past, stopped and said, `Is this your pig?' which I thought was a strange question.''

The man tried to remove the pig from the car.

The corker porker left ''hefty bruises'' on her shoulder and thigh.

The ''smelly, phlegmy, dribbly'' pig had left its stench and scratches in her car. She and the man coaxed the pig to its paddock. Despite her scare, she wished the pig no harm.

The pig's owner, Cam Romeril, said Boris would have been seeking affection because the family were out for the day.

However, he understood why 5-year-old Boris - who sported 10cm tusks - would have scared the woman.

''His personality will save him from becoming salami.''

The hole in the fence where the pig escaped had been repaired.

Dunedin City Council animal control officer Alister Wilden said it was the first time Boris had come to the council's attention. If there were more complaints about him, action could follow.