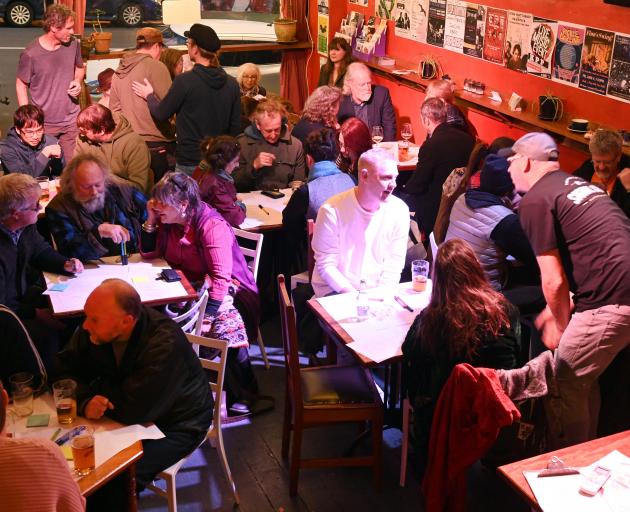 About 50 people attended a forum at Dog With Two Tails on Saturday to discuss how noise control rules could be improved in Dunedin. PHOTO: LINDA ROBERTSON
The Dunedin City Council needs to put up some cash to investigate how to improve the city’s noise control rules, an advocacy group says.

About 50 people gathered at inner city venue Dog With Two Tails on Saturday night for a forum on noise control regulations, following conflict over the current system.

Noise control officers shut down a folk show at the venue on April 9, and police were called.

The council later conceded some aspects of the assessment carried out in response to the complaint were not up to scratch.

But one of the organisers of the forum, Fairleigh Gilmour, said it had become apparent the issue was systemic, rather than a one-off.

"It’s a broader issue in Dunedin," she said.

"A lot of people who came have been in Dunedin a long time and were able to talk about all these different experiences."

The Save Live Music group, of which she was a part, wanted the council to allocate funding to investigate possible solutions to the problem.

"We want a solution... in line with the council’s own arts strategy which emphasises that we are a city that values art and culture and wants to become one of the great small cities of art and culture."

The district plan needed to better reflect the council’s own strategy, she said.

"It wasn’t people sitting around criticising what’s happened; it was really much more about what can we do to protect the future of Dunedin’s live music, because we all love it so much."