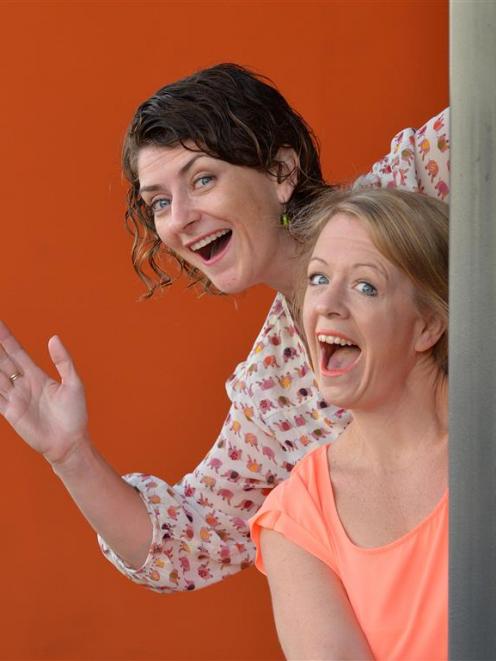 Singers Charlotte McKay (left) and Harriet Moir premiere their Dunedin Fringe Festival comedy cabaret The Reinvention of Us tonight. PHOTO: GERARD O’BRIEN
A couple of classical singers are embracing their strengths and weaknesses in a new comedy cabaret and leaving time to socialise.

Classically trained singers Charlotte McKay and Harriet Moir, of Dunedin, premiere their show The Reinvention of Us at Cafe LOL at Dunedin Fringe Festival tonight.

‘‘There is no-one else in the world I would rather be making a dick of myself with,'' said Moir to McKay yesterday.

The show recounts the story of the singers' career trajectory from ‘‘rising stars'' to performing in Wall Street mall tonight.

‘‘She threw her hands up in despair at us and said, ‘Ladies, you need to go and sort your lives out before singing any more.' It's not that our singing fell apart. We were doing OK but we lost the spark and started to become interested in other areas of our lives.''

The best friends could not deny themselves a social life to be classical singers.

‘‘It's what we always thought we wanted but actually we didn't,'' McKay said. ‘‘We wanted to have fun,'' Moir said.

The show was about finding discipline on your own terms and remaining true to yourself, Moir said.

‘‘The show is about embracing that we aren't pure and perfect vocalists, we are storytellers and that's awesome,'' Moir said.

‘‘We'll make you laugh and we'll make you cry from telling a really good story ... we just want to take people on a ride,'' McKay said.

They decided to premiere the show at the festival so they had a deadline to create the show.

‘‘The fringe festival seemed like a really good opportunity to stop talking and get our act together,'' McKay said.

‘‘Yeah, it was the kick up the pants we needed,'' Moir said.

They expected to create other spin-off shows from the festival performance, McKay said.

The 120-seat show performance tomorrow has sold out and yesterday morning about 40 tickets remained for tonight's performance.

The humour of the show is mostly self-deprecating but some of it is pointed.

The pair opened the festival's opening showcase at Regent Theatre with the song Moving Right Along by Jeff Blumenkrantz, where the singers roamed the audience to pinpoint and sing about the inadequacies of men.

‘‘That is our most confronting song and attacks the audience the most ... when I said a man smelled like chicken vindaloo, I was so stoked to be singing it to an Indian guy,'' McKay said.

‘‘We both feel somewhat uncomfortable doing that song and it does loosen the crowd and it is a bit racist, but it is what it is, it's not our views,'' says Moir unapologetically.

●The comedy cabaret The Reinvention of Us, tonight and tomorrow at Cafe LOL.