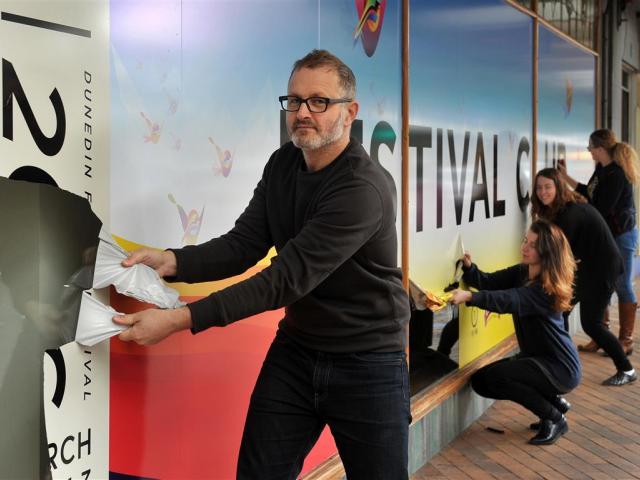 The Dunedin Fringe Festival is over for another year and has been a success, director Josh Thomas says.
A Dunedin production took the top prize at Fringe Awards Night.

Get set for an autobiographical performance celebrating a Northland comedian's many coming outs.

Enter the potter's den and experience the Middle East.

The self-proclaimed ‘‘fairy godmother of bent burlesque'' is set to send up gender and sexuality issues in her Dunedin Fringe Festival show.

Dunedin comedian Simon Kingsley-Holmes tells jokes in the Otago Daily Times Black Box at Fringe HQ yesterday to promote his show You Get What You Pay For.

A couple of classical singers are embracing their strengths and weaknesses in a new comedy cabaret and leaving time to socialise.

Brace yourself for an R18 children's show brought to you by the letter O for offensive.

Actors Kerry Lane (left), of Dunedin, and Joshua Coles-Braun, of Twizel, practise on the Otago Museum lawn yesterday for their respective roles as Mr S. Treighton Arrow II and Joanna LaHeaux for the Dunedin Fringe Festival show A Sanctimonious Celebration of Drag and S&M.

A stroll the length of New Zealand has given a French artist the time to think about his Dunedin Fringe Festival performance.

The word and the note are meeting halfway in a collaborative arts event, writes Tom McKinlay.

Get ready for a performance of raw power.

The hit visual art comedy about bollards could return to the Dunedin Fringe Festival for an encore performance.

The Dunedin Fringe Festival production Pecha Kucha Night Dunedin City Vol. 28 tonight will feature 12 presenters, who are given 20 seconds to speak on each of 20 images.