Nude Blacks on a hiding to nothing 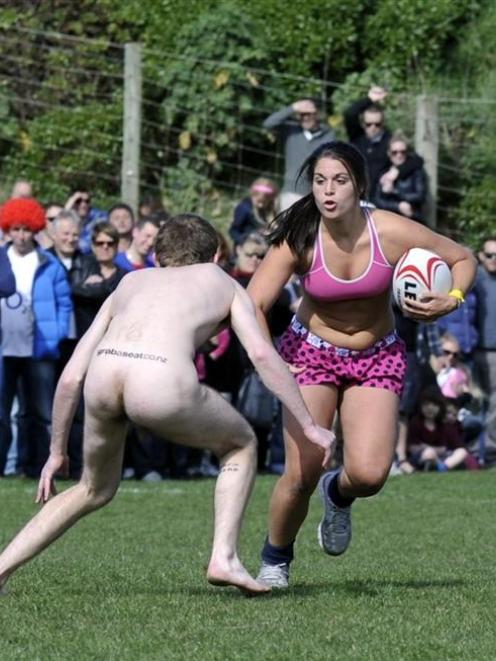 A vocal crowd of 1500 people, including a large international media contingent, gathered at Kettle Park in Dunedin shortly after noon on Saturday to watch the seven-aside contest.

The undefeated Nude Blacks were the first out of the changing sheds, wearing a new uniform addition - a scarf - before beginning an impressive warm-up routine which drew gasps and cheers from visitors and locals alike.

Following a rousing Nude Blacks haka, the fully clothed Conquistadores asked "Are you ready, girls?" before the six senoritas and a senor responded with a well-orchestrated Latin-influenced haka.

Any thoughts the all-male Nude Blacks were in for an easy ride was gone the moment guest referee former Highlander and Scotland international Brendan Laney blew his whistle and the Conquistadores let out an "arriba".

The hard tackles on soft flesh drew applause from the crowd, particularly when the visitors resorted to their version of strip rugby and removed an item of clothing to celebrate their first try. That celebration was short-lived when the Nude Blacks scored a well worked try and the Conquistadores responded by putting back on an item of clothing.

The psychological warfare coupled with questionable officiating from referee Laney caused the Nude Blacks to push too many passes and take their mind off the ball.

While taking a spell on the sideline, Conquistadores' ring-in, Dunedin radio disc jockey Damian Newell, said that apart from the occasional language problem "it was all about the beautiful game".

"The girls are putting in the full hits, and as for their offloads ... Sonny-Bill Williams has got nothing on them."

A star for the Nude Blacks was heavyweight prop Tom Heaton (20), who said "they may be pretty but they hit ... hard".

While his team liked to see the girls celebrating their tries - "we want to win".

Nude Blacks' stalwart Devon Latoa said he could not fault the senoritas' game plan as it encouraged the crowd to support their tries while dissuading any opportunities for the home team.

Organiser Ralph Davies said at the after-match presentation it was the first time the Nude Blacks had lost "and you could not fault the efforts of their opponents today".

Conquistadores' player Monica Garcia said it "was really exciting, and a different game". She hoped the Nude Blacks would travel to Spain to try to regain the trophy.